Hello Darling. It’s me, Elvira, Mistress of the Dark! I'm hosting Artix Entertainment's 20th anniversary... and you're the guest of honor. Join us inside the video games AdventureQuest Worlds and AdventureQuest 3D for a marathon of cursed B-horror adventures.

Play the special event in... 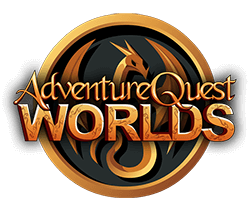 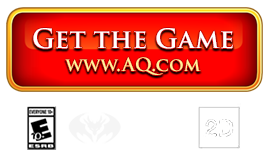 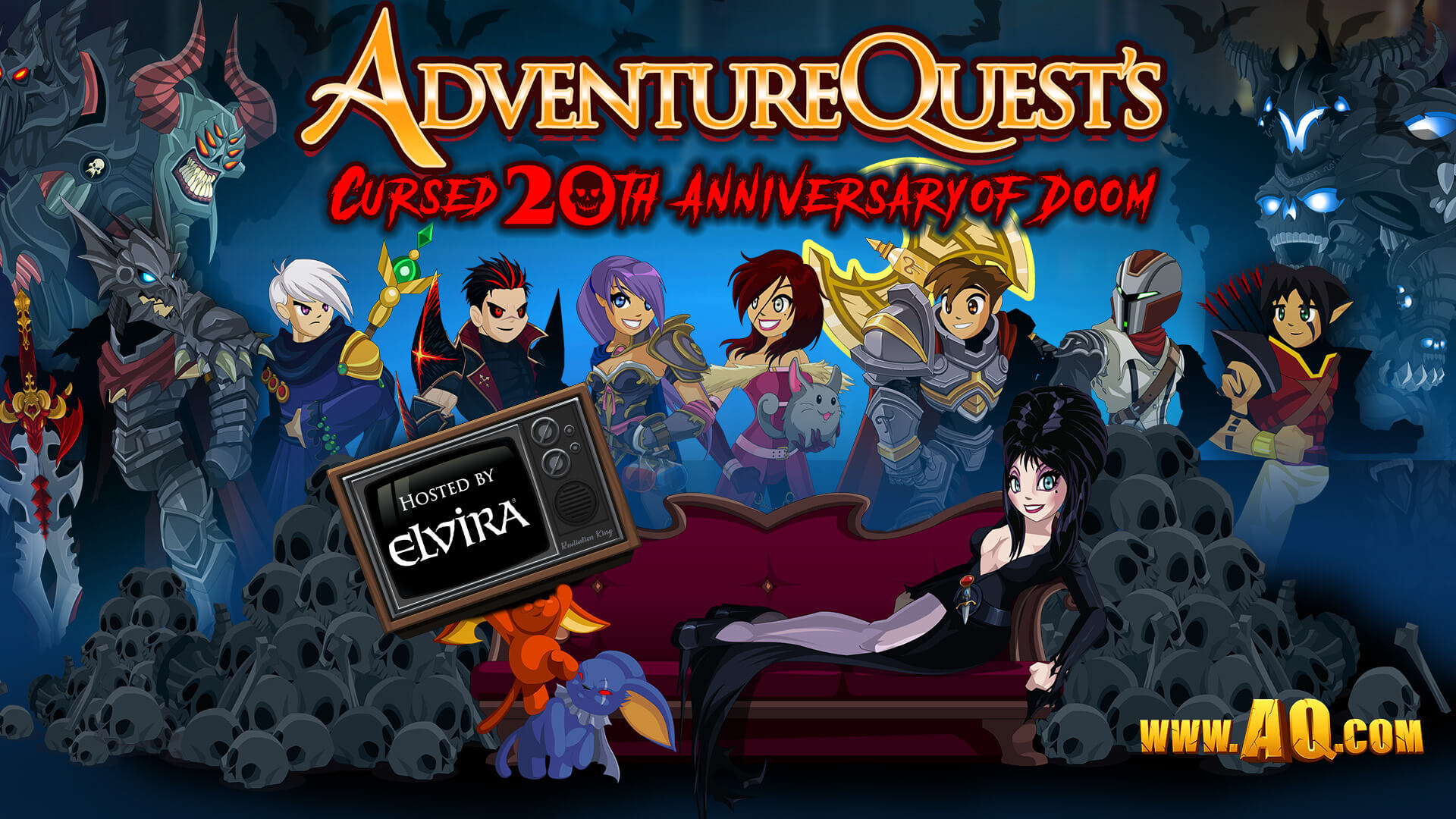 AdventureQuest Worlds is updated 2D anime-cartoon massively multiplayer video game! Every week for 10+ years, our passionate team has been expanding this game's growing world with new stories, maps, monsters, quests, or items. Play this and all of the Artix Entertainment games for your PC, Mac, and Linux with our safe & super light-weight Artix games launcher.
Get the Artix Games Launcher 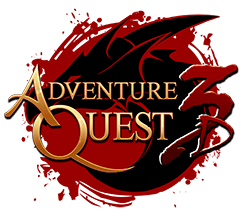 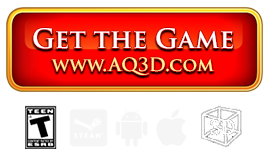 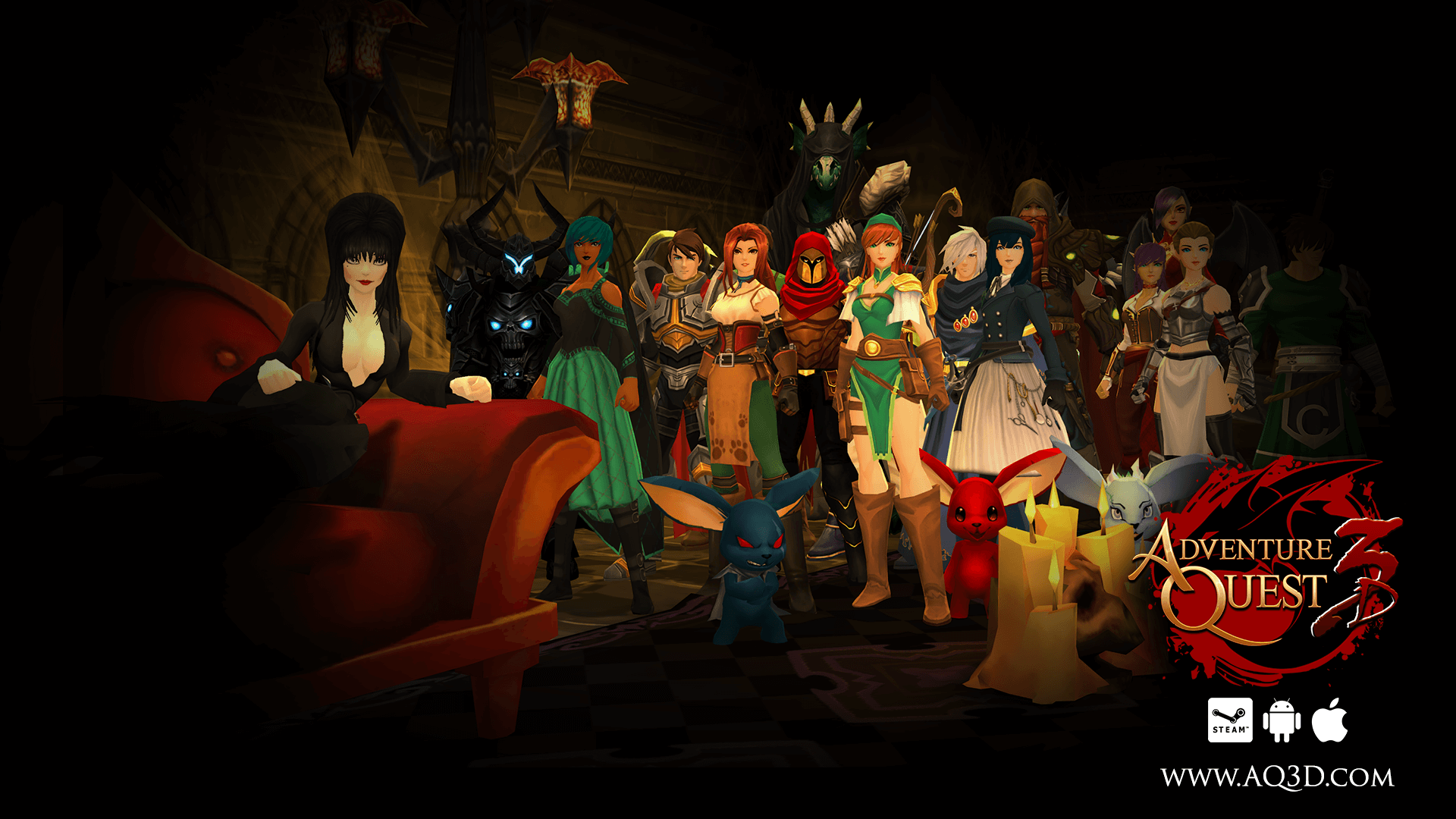 All of your devices are a portal to our growing fantasy 3D game world! Login and play with your friends from your phone, tablet, or computer. Featuring travel forms, daily boss fights, collect and switch classes at will, and more. AdventureQuest 3D is updated weekly with new stuff too!  Experience the AdventureQuest 3D version of this special event on any device.
Get AdventureQuest 3D for your Phone, Tablet, or Computer 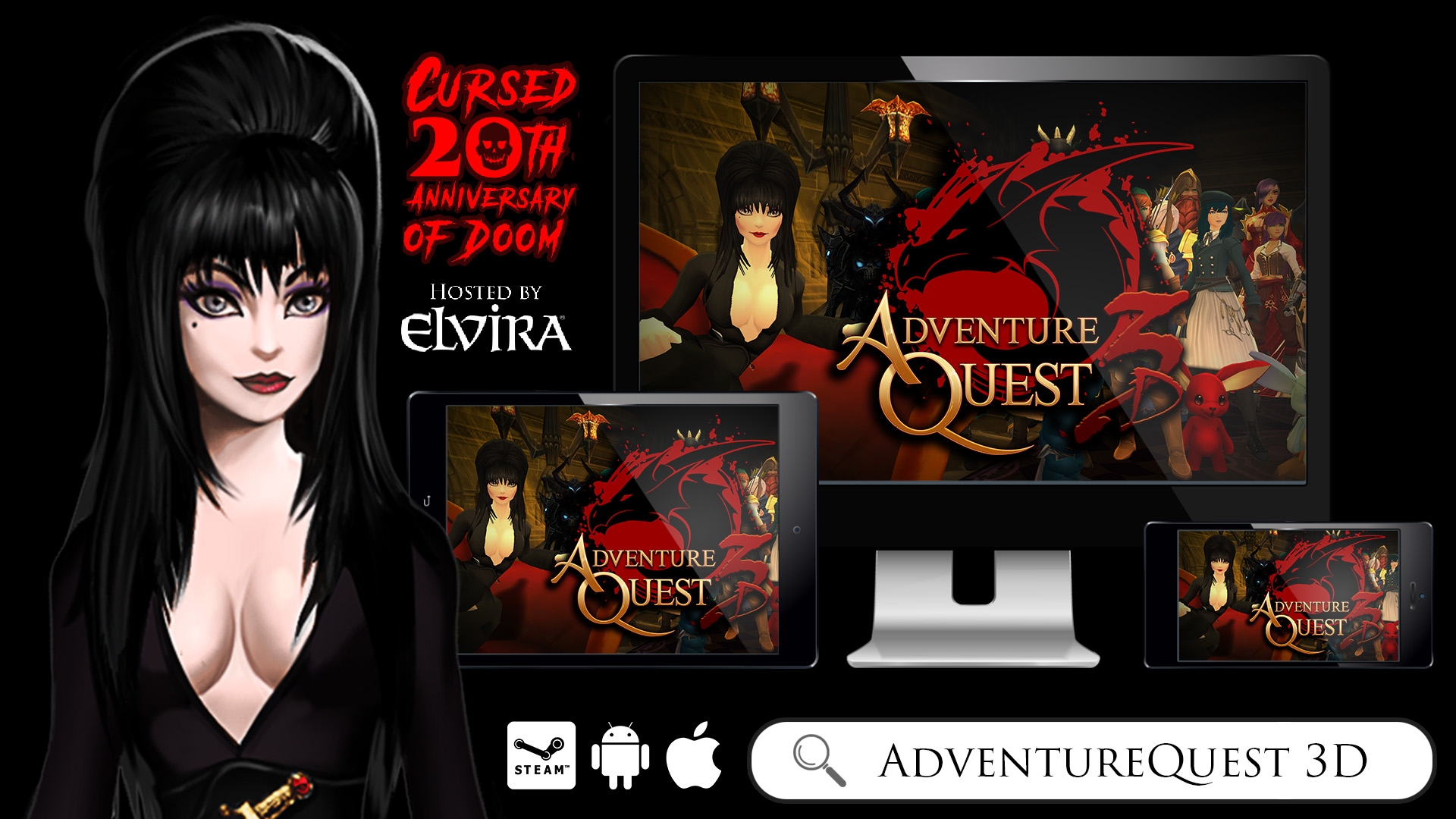 Play the Event on your Phone, Tablet, or Computer

Want to play from your phone, tablet, or Steam? Experience the special event in our MMORPG, AdventureQuest 3D.

The event is hosted by Elvira, Mistress of the Dark and features voice acting, music, and cameos from George Lowe, Aurelio Voltaire, Mia Josefine Park, Kimberly Freeman. Since you're the guest of honor, this special event is free to play while it lasts. So grab your sword, dust off your spell book and join us...

From the top of her beehive hairdo to the bottom of her stiletto heels, Elvira personifies the horror genre in one spooky, sexy, fun package.

Played by actress Cassandra Peterson, Elvira was the first horror host ever to air on national TV and she has emerged as one of pop culture’s most original and outrageous characters. Elvira’s reign has now spanned 40 years and includes her long-running nationally syndicated television series, Movie Macabre and two feature films Elvira, Mistress of the Dark and Elvira’s Haunted Hills. Cassandra’s film appearances include Peewee’s Big Adventure, All About Evil, and the The Munsters, directed by Rob Zombie. Elvira’s recent TV appearances include Ru Paul’s Drag Race, 13 Nights of Elvira for Hulu, The Goldbergs, and the voice of an animated Elvira in Happy Halloween Scooby Doo! 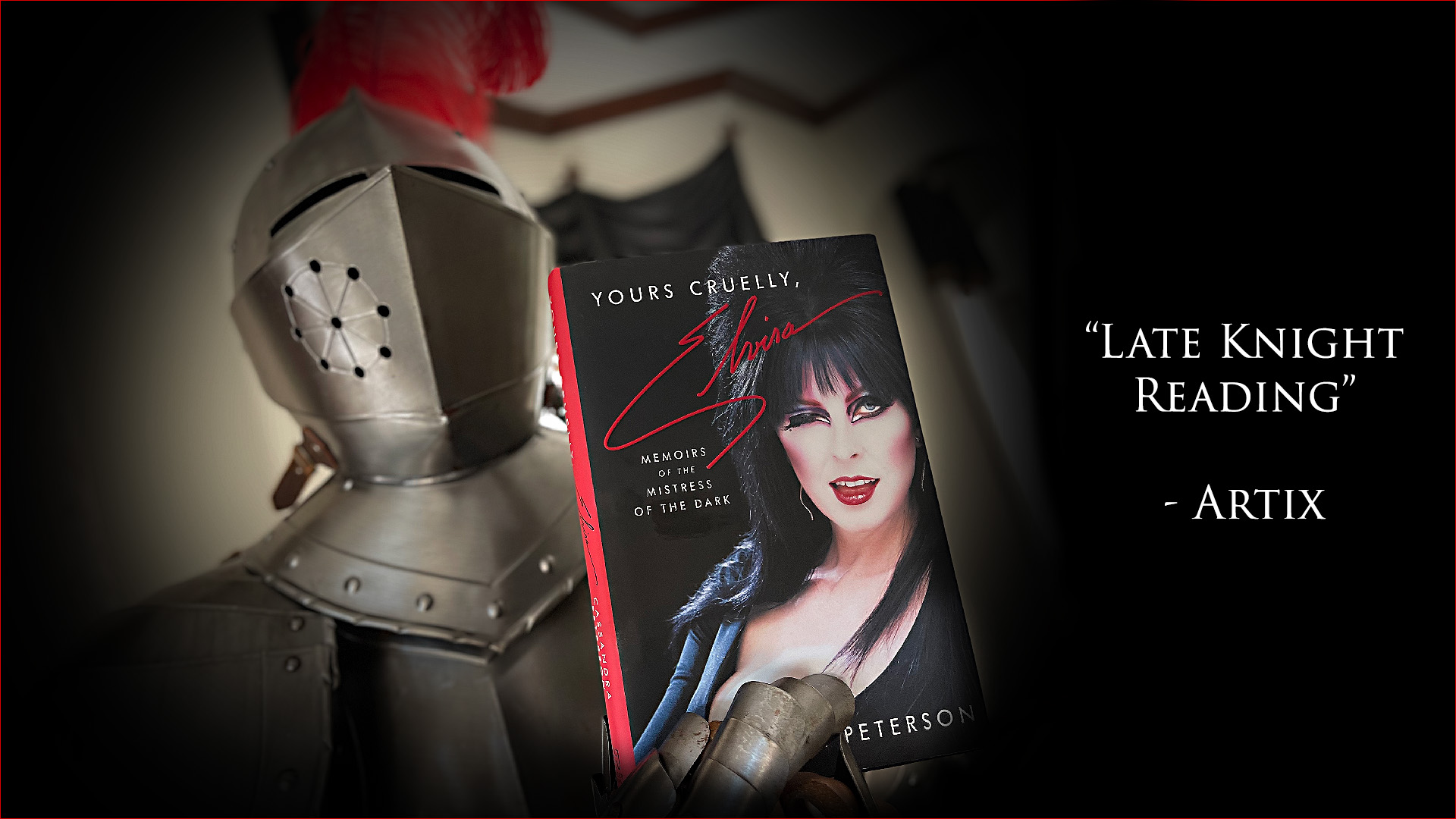 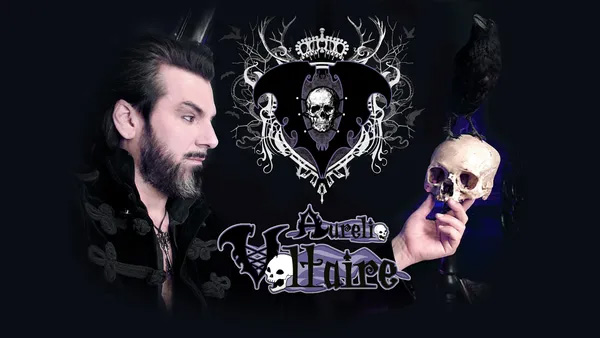 Aurelio Voltaire is often described as a modern day renaissance man. He is a singer/ performer, creator of comic books, animation and toys. Many know him for his songs "Brains!" and "Land of the Dead" from the Cartoon Network show "The Grim Adventures of Billy And Mandy". Voltaire's live shows, whether solo or with his skeletal orchestra, are full of stories and games. Many describe his shows as sitting around a fire while an old friend regales you with tales, presuming that old friend drinks a barrel of rum a night, dates zombies and wrestles Krakens. 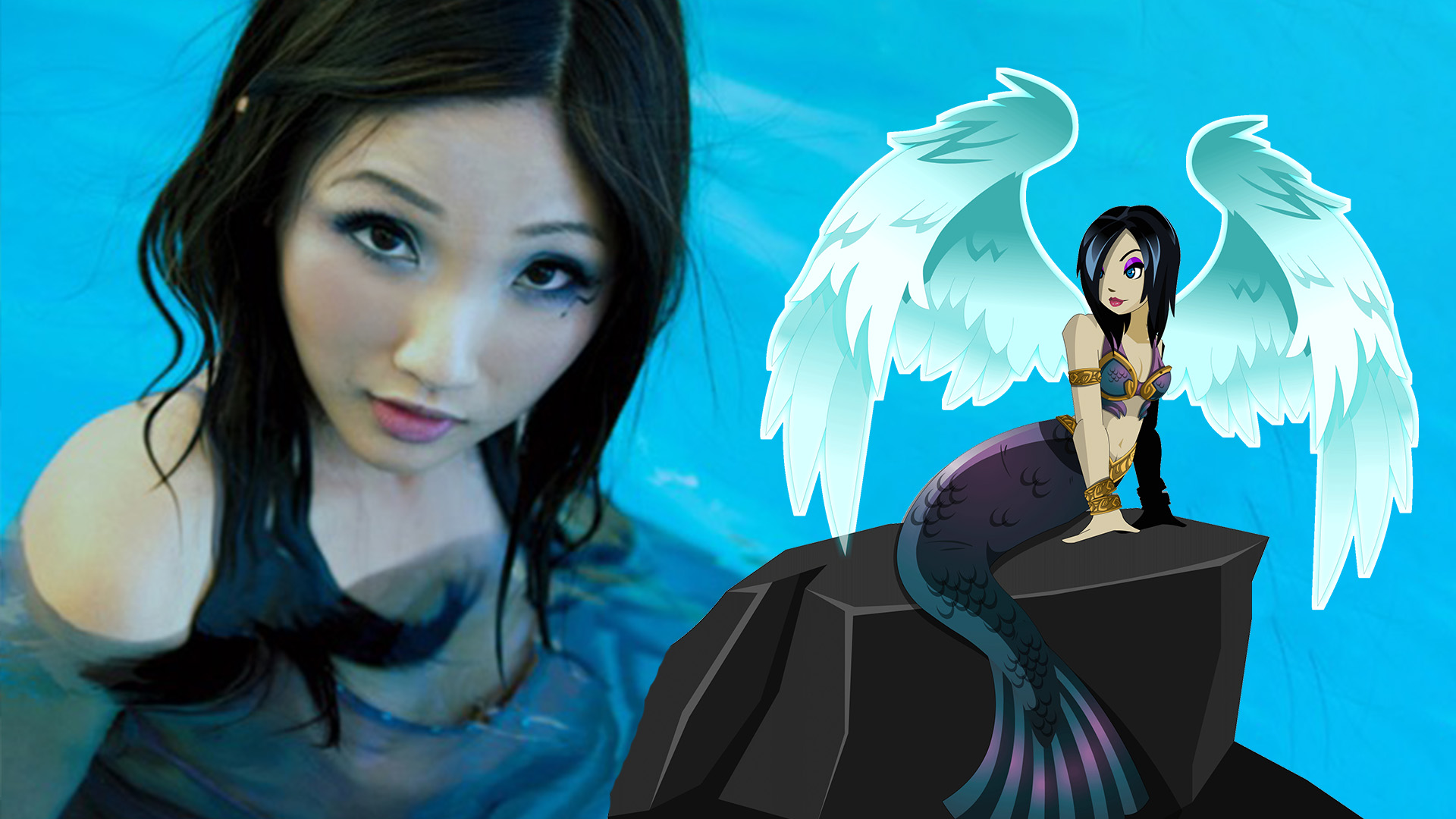 Brace yourself for sultry, sweet, ethereal vibes! Mia Josefine is an Australian born and bred singer-songwriter. She is one half of duo 'Smoke and Stardust', one half of duo 'Orenda' and you may know her as lead vocalist for cover band 'Summersalt'. Mia is the ‘Mer’angel’ (Half mermaid, half battle angel) character from Artix Entertainment’s Adventure Quest Worlds computer game. Her diverse style leans towards pop, acoustic, blues and folk. Playing 'by ear', Mia creates her own music largely on the piano/keyboard and more recently on the ukulele. 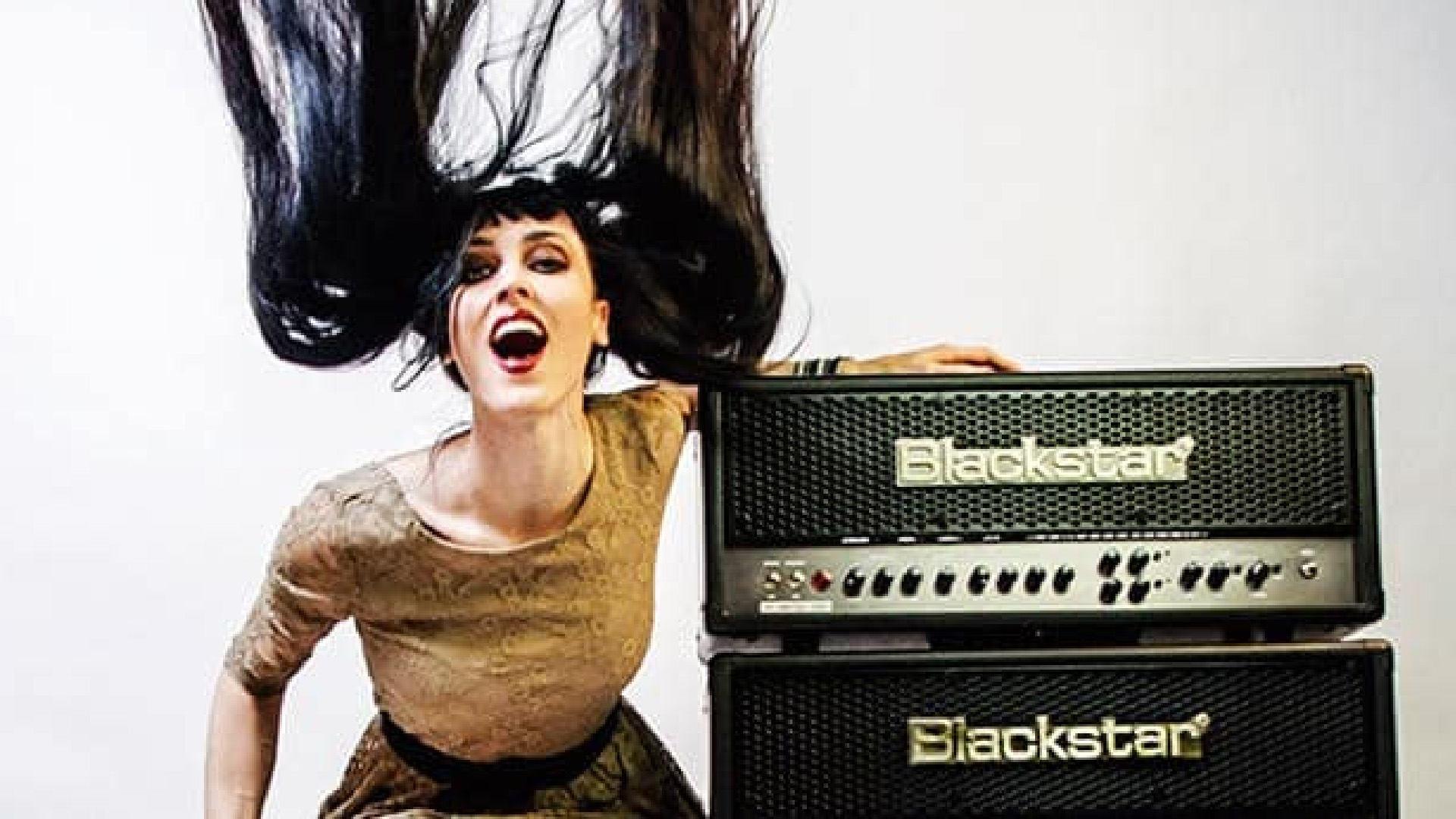 Featuring the voice of the AI entity formerly known as Kimberly Freeman... because she is a robot now. Beep Boop. Beep Boop. She is known for her guitar virtuosity and has been named as one of the Twenty Most Extraordinary Female Guitarists by Guitar Player Magazine. As a returning guest, players of Artix Entertainment games know her best as Chaos Lord Kimberly and the artist behind the theme-song to Pony vs Pony. 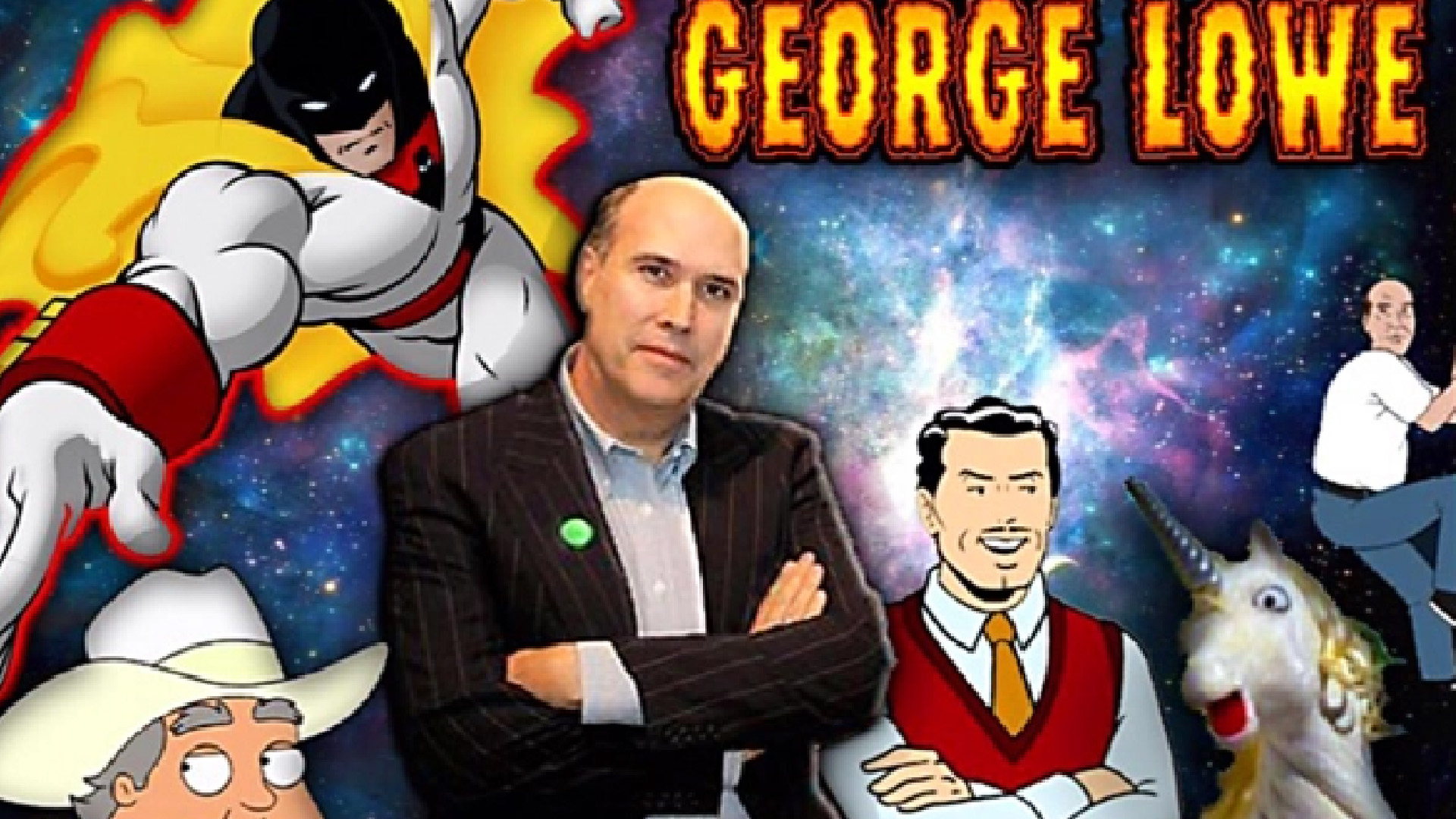 George Lowe is an American voice actor and comedian from Florida who is most well-known for voicing the Hanna-Barbera character Space Ghost in Space Ghost Coast to Coast and The Brak Show. He voiced in other projects such as the narrator in the 2000 Grinch video game, Mr. Beefy and other characters in Aqua Teen Hunger Force and Brak's Dad in The Brak Show. 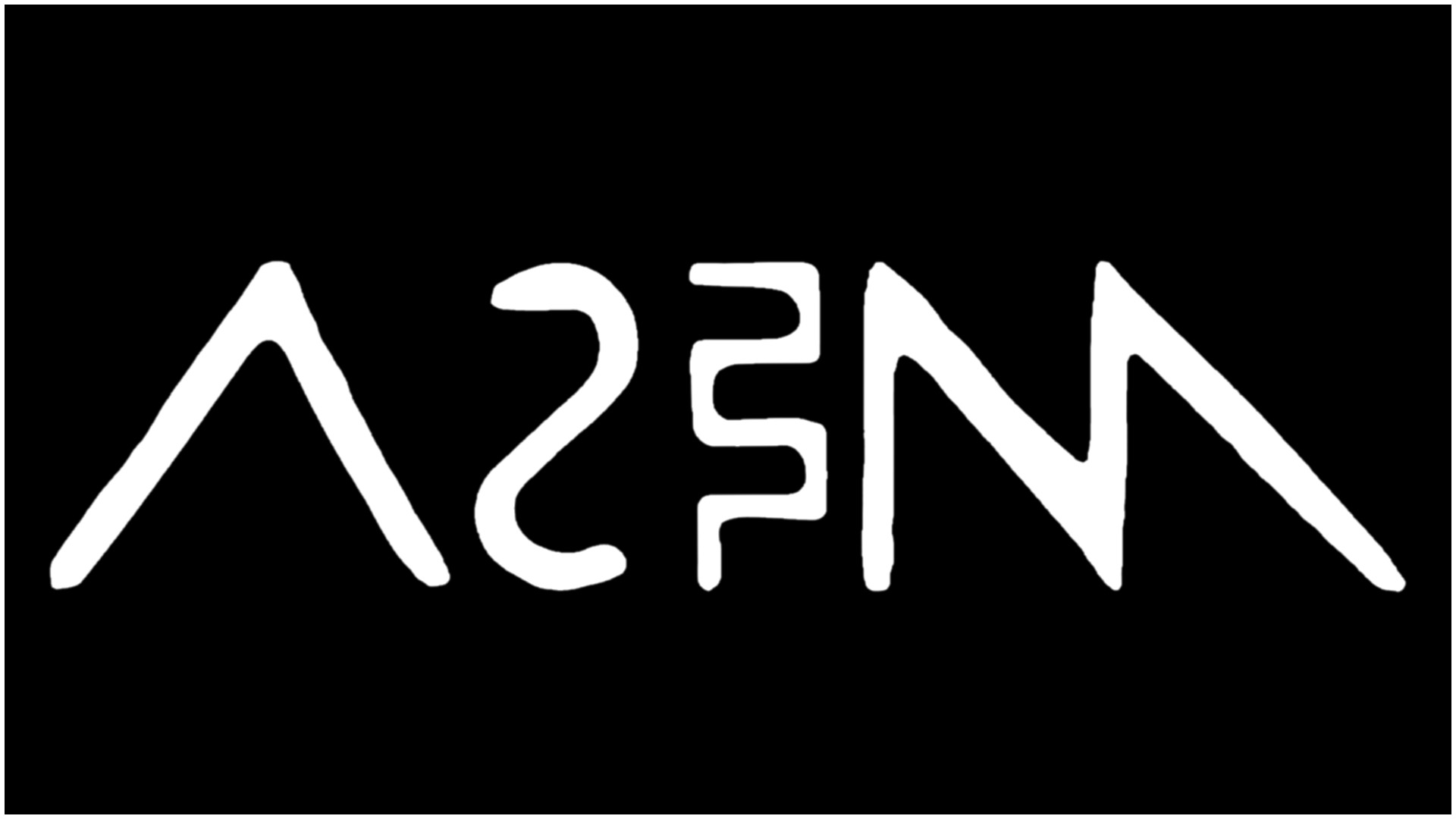 We do not know much about this mysterious new synth duo. But their music is bonkers. You NEED to experience the full version of their songs with headphones. Our in-game event features a new song, "Astronaut", available now at on their website and all streaming services. 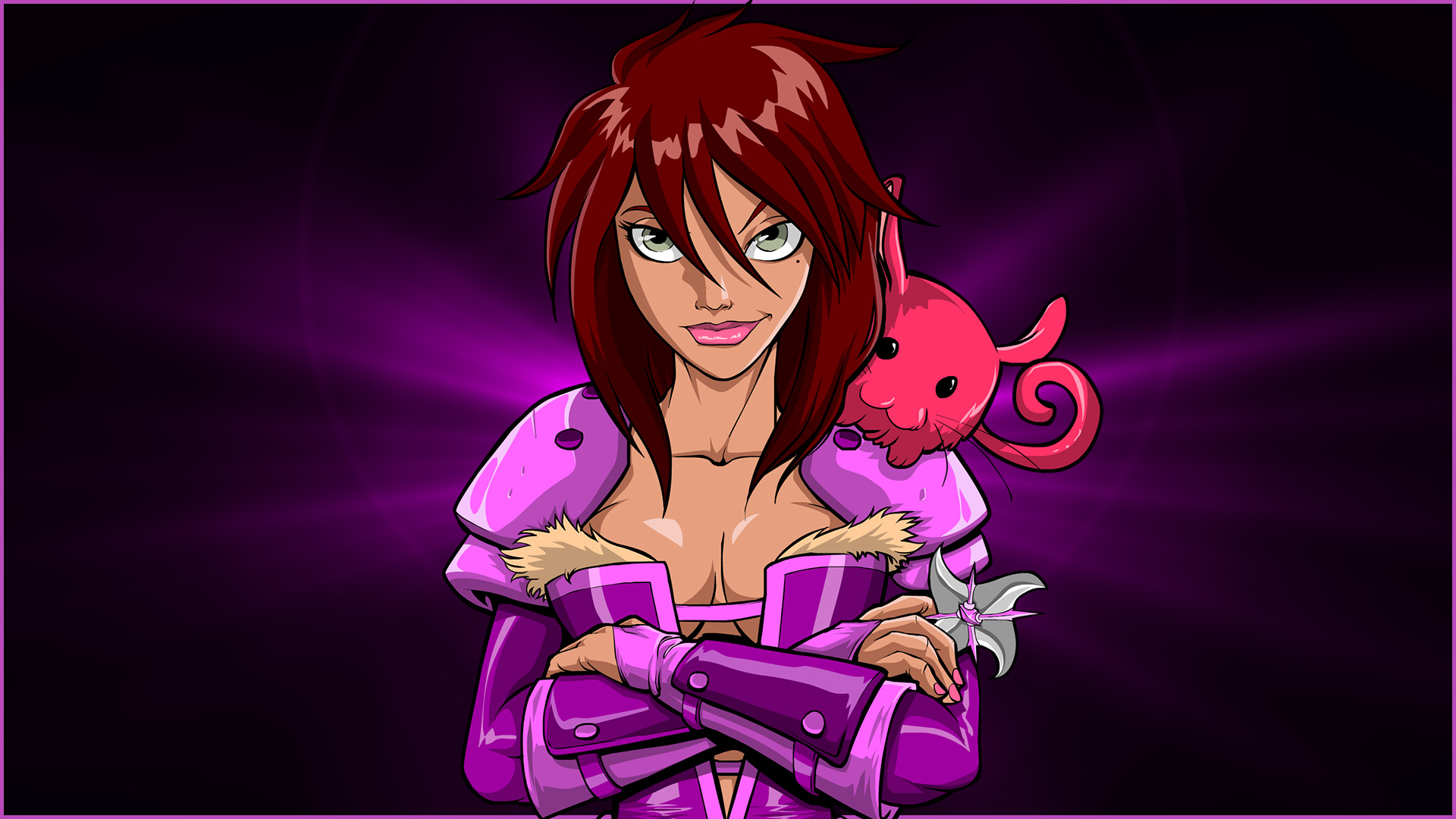 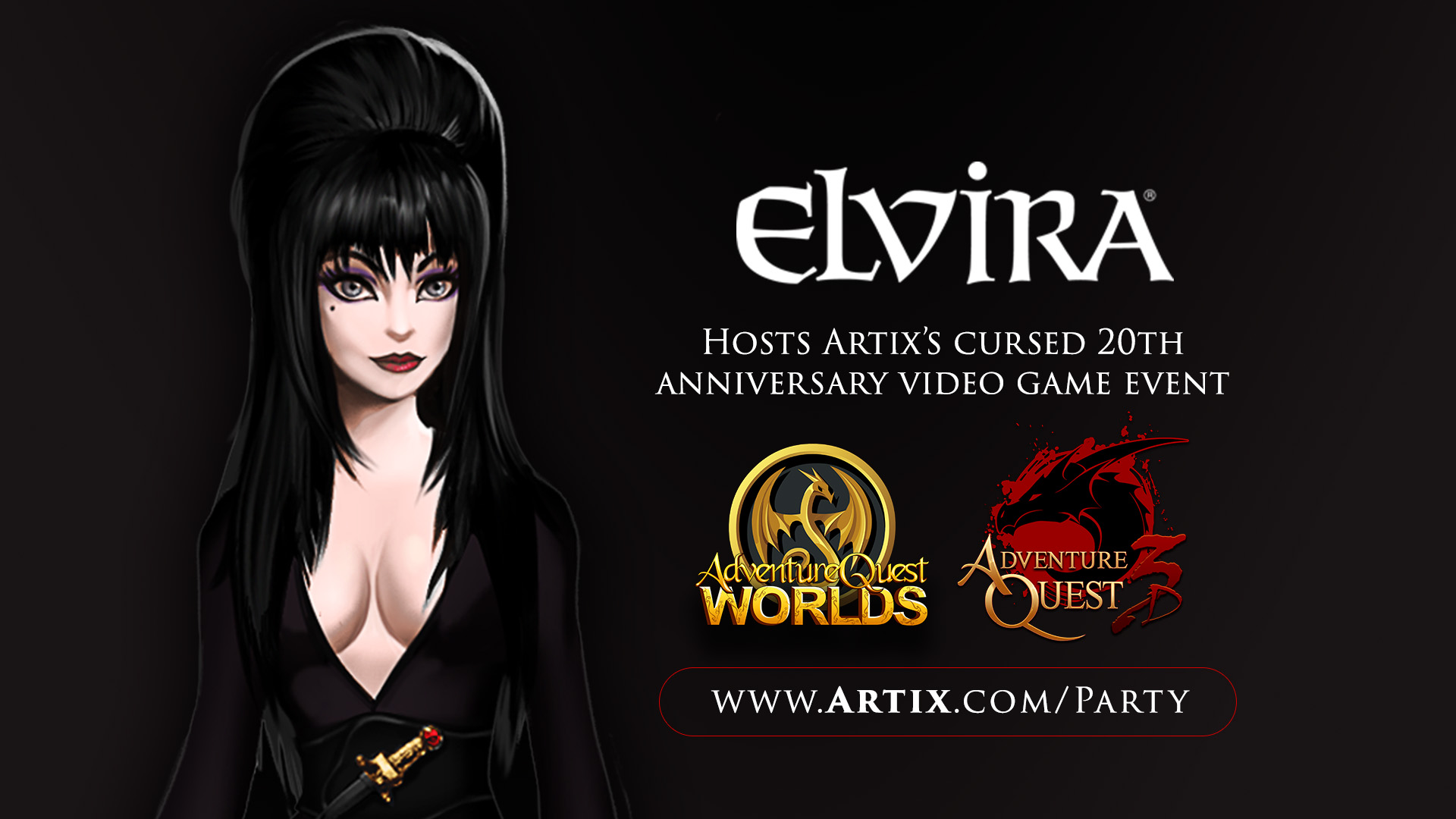 The B-horror video game show must go on!

How do you play the special event? Just login to either game and make your way to the main town. Elvira is waiting for you there.

A Marathon of  B-Horror Adventures

This event features new maps to explore and gear to loot. Earn special badges and other anniversary surprises. You only get to celebrate your 20th birthday once.

The 20th Anniversary specific content will only be available to play for the remainder of this year. On New Year's, at the stroke of midnight, it will mysteriously disappear. Unless the automated system stuff breaks... in which case we will do it by hand the next day. You know how technology is.

Play the special event in...
BOTH VIDEO GAMES!