Vesper here and welcome to my very first design notes post! I’ve never done this before, so please be gentle on my sensitive little soul. I was tasked with writing about our Lucky Day events, which are Artix Entertainment’s version of St. Patrick’s day.

St. Patrick’s day exists to honor the patron saint of Ireland, Saint Patrick. Legend has it, he drove snakes out of Ireland and also used a shamrock to explain his teachings (hence, the shamrock motif!) These days it is celebrated mostly by wearing green and partying, but for some it is the first hint of spring, and seeing all the green feels good after months of winter.

To be honest, I had no idea what Lucky Day or even what St. Patrick’s day is all about other than Irish leprechauns and rainbows until now. I’m from Puerto Rico and, at least in the area where I grew up, St. Patrick’s day was not really celebrated, and it certainly was not explained to me. I think I understand it a bit now! So, let’s learn about how we celebrate Lucky Day in some of AE’s games together!

Want to kick some leprechaun butt for some sweet gold? You most certainly can if you  aid in fighting the leprechauns off in the Blarney war!

The Lucky Day equivalent in the original AdventureQuest focuses on the years’ long war against the Leprechaun Republic, which started over a  misunderstanding about gold gone missing.

In recent years, the President of the Bank of Leprechaunia, Uncle Sham, is the main antagonist of the annual Blarney War event. Help us thwart this miserly foe and his various money-making schemes (a few of which involve some cool looking mechs!) 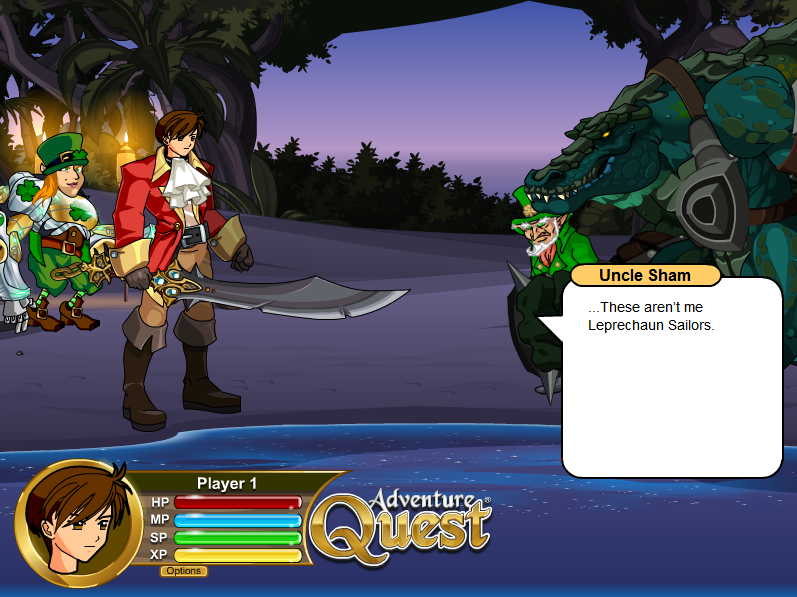 Come one, come all to the Shamrock Fair! Try your luck at a variety of fun mini games, from ring tossing to memory games! Are games involving smacking sneevils more your speed? We have that too!

By partaking in these fun minigames, you can net yourself some golden tickets. Exchange them for sweet Lucky Day-themed gear and items at the Shamrock Fair merch shop so that you can really feel like you’re part of the festivities! 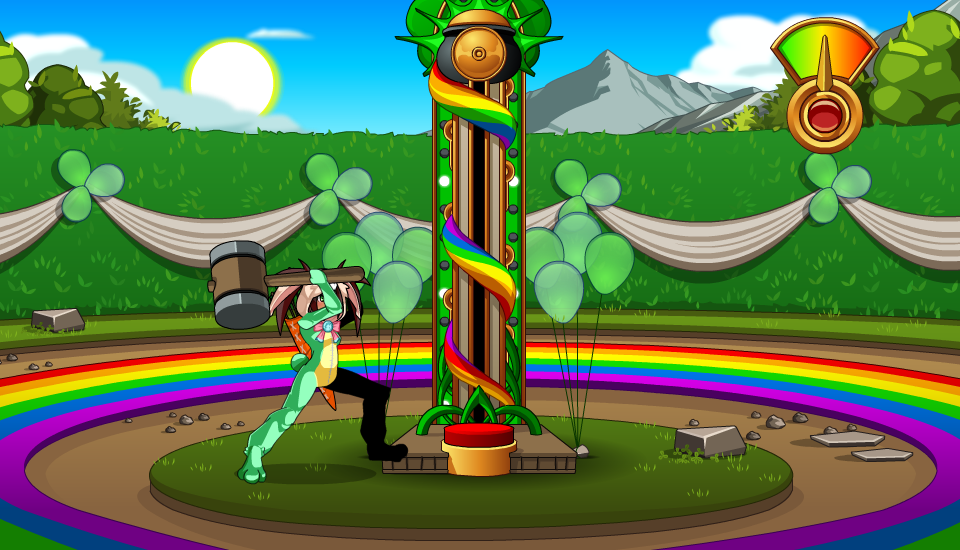 Lucky Day in DragonFable is different every year. They say variety is the spice of life, after all! Lukkhi the sneevilchaun will often need your help. Whether it’s acquiring gold or retrieving stolen gold, it’s up to you to lend a hand!

Lukkhi isn’t the only one who will be asking for your help as you play through the Lucky Day storybook, however. You can partake in other quests too, such as:

Join us at DragonFable to play these chapters and the newest chapter of the Lucky Day storybook! 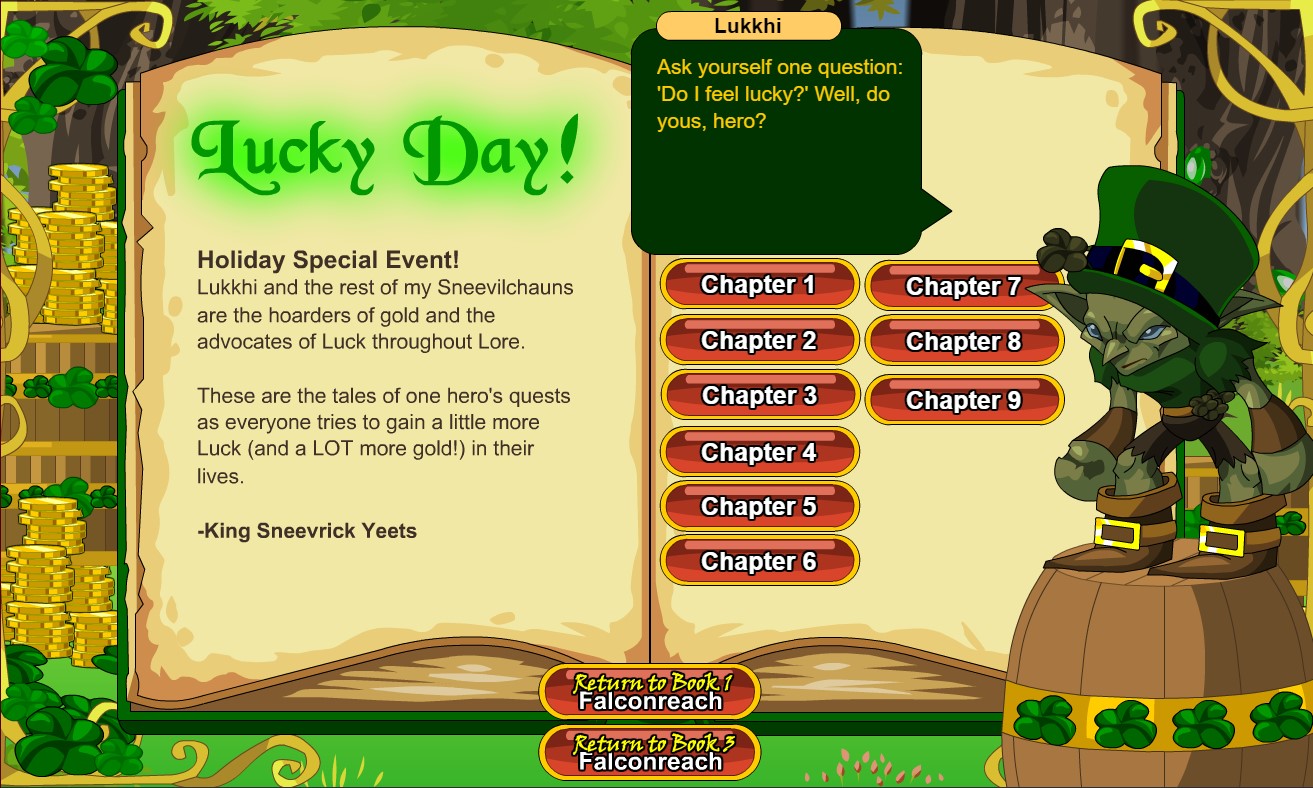 EpicDuel’s version of Lucky Day isn’t quite what you’d expect in terms of the theme. You won’t see any leprechauns or rainbows in this gritty environment. However, you will definitely see a lot of green! You know, for science and stuff!

Most of Epic Duel’s Lucky Day related content centers around the Biological Preserve, where the last of Delta V's native greenery is contained. NPCs such as Xraal, Brachylagus, and Cinderella utilize the unique properties of the region to craft weapons and items, such as the seasonal rare: Botanical Nightmare, which is a mutating weapon! How cool is that!? 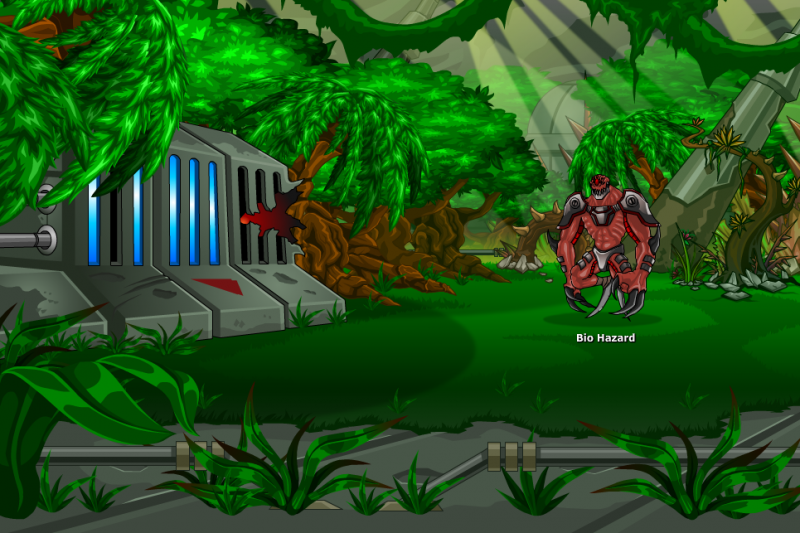 Thank you for joining me on my little journey of figuring out what this lucky green holiday is all about! I have to say, my favorite aspect of this holiday is definitely the rainbows. I just love bright pretty colors! Not to mention the promise of a pot of gold at the end of it. What is your favorite thing about Lucky Day? Tell me on Twitter!

Have a lovely lucky weekend, and...