Battle Drakath One on One and Reap the Rewards

If you fought Drakath at the end of the Chaos Lord Saga, you know that you haven’t REALLY faced him. Not in a fair fight! This week, if you’ve finished the Lords of Chaos Saga, and are at least level 80, return to the Inn at the Edge of Time to face Drakath at his full power!

Champion Drakath can be defeated once a week* for 5 of his Insignias, which can be used to unlock new Chaos-themed items, as well as merge upgrades to existing ones!

That's right, this year's birthday class can only be obtained by those who challenge Champion Drakath, and win! Read on to see theclass breakdown for more details.

TIPS WON'T SAVE YOU, HERO. DO YOU ACTUALLY THINK YOU CAN DEFEAT ME?

*Weekly quests reset every Friday at 12:01 AM EST. If you complete a weekly quest on a Thursday, it will be available again on Friday! 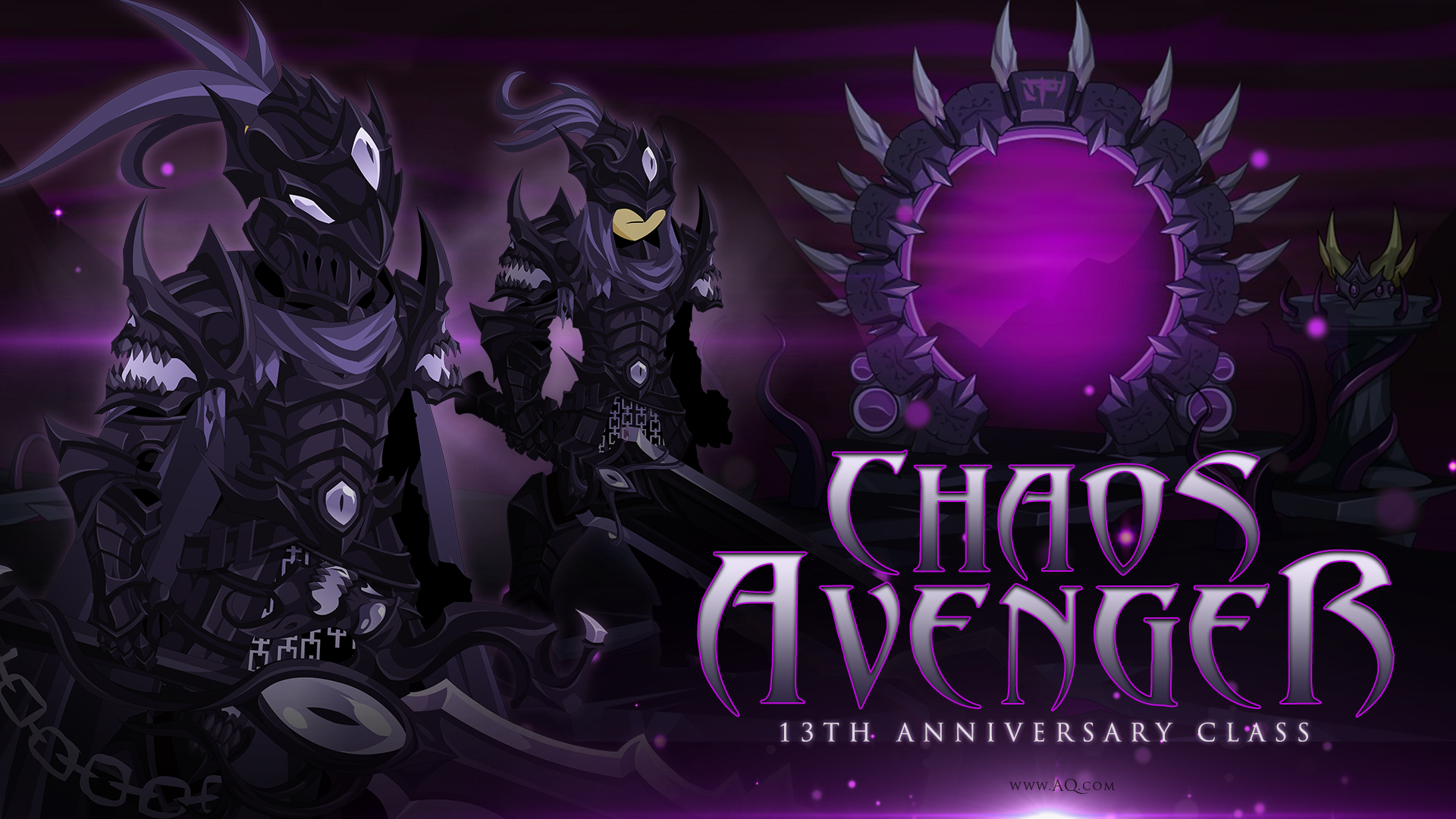 A Chaos Amulet is Yours to Wield!AdventureQuest Worlds turns 13 this year, and our month of Chaos begins October 1st with a new challenge boss, [Champion] Drakath! Then, return on Friday, October 8th for our new class, Chaos Avenger!

How to Unlock the Class

What if Drakath's Chaos Amulet was yours to wield? Time to find out! To unlock the class, you'll have to defeat the Champion of Chaos himself and obtain his Insignias to earn a Chaos Amulet of your own. There is no Adventure Coin variant of the Chaos Avenger class.

Recommended enhancement: Lucky. In one timeline, The Hero managed to defeat Drakath and get a hold of their Chaos Amulet. Instead of becoming the Slayer who tried to destroy Lore, The Hero ended up becoming the Avenger that saved it.

Mana Regen: The Chaos Avenger regains 50 mana when they strike a target with Chaos Greatsword.

Swing your Greatsword down on your target for massive damage. Applies a stack of Chaos Fury, increasing your Crit Chance and Crit Damage by 6% for 12 seconds, stacks to 15. Deals double damage to Branded targets.

The Chaos Avenger's weapon of choice is the greatsword! This auto attack is your main source of damage on this class. What is a Branded target you may ask? We'll get to that soon enough.

Impale your target with your Greatsword to drain life from them. Deals damage and chaorrupts your target's defenses, increasing the damage they take by 8% for 15 seconds, stacks to 5.
One of your sources of healing on the class, with an added defense debuff to really leave an impact on your opponent!

It wouldn't be Chaos without a bit of randomness. The activation chance for each debuff is as follows:

Chaorrupt the raw energy around you and release a portion of it at your target, dealing damage while absorbing the remainder into your armor. Applies a stack of Chaotic Armor, reducing the damage you take by 30%, plus 5% for each additional stack (up to 55% total), and a stack of Chaotic Regeneration, which heals you over time and stacks to 5. Both effects last 15 seconds.

A very defense based skill. Not only does this skill contain your second source of healing, it also contains a hefty defense buff to yourself. The bulk of the buff is applied on the skill's initial use, but you'll have to use it a few more times if you want to get the full effect!

Deals damage and channels your fury into your greatsword, increasing your outgoing damage by 50%. Also increases your Haste by 5%, plus an additional 5% for each stack of Ravaged your target has (up to 45% total) for 15 seconds.

The longer your battles last, the stronger the Haste buff on this skill becomes. A flat 50% increase to your outgoing damage isn't too bad to have either!

Starting at rank 1, all skills (except Chaos Greatsword) Brand your target. Whenever your Chaos Greatsword strikes a Branded target, the Brand is consumed to deal double damage to them and apply Ravaged, which stacks to 8 and is used for Fury Unleashed.

This is the passive that ties the class together. Each time you use a skill, your next auto attack will be empowered to deal DOUBLE the damage. The timing for doing this is quite forgiving, but there may be times where you'll have to decide on which skill to use next.

Strength increased by 50%, but INT reduced to 0.

The Chaos Avenger has harnessed a power that only one other has wielded before it. With its powerful attacks, great survivability stats, and crippling debuffs, the class is able to take on the toughest of bosses. So unsheath your greatsword, and show your opponents the true power of Chaos!

Since the permanent version of the class will take a few weeks to obtain, we wanted to give you guys a way to try out the class ahead of time! The class skills on the preview version will change to Berserker's after the preview period ends.