Talk Like a Pirate Day is one of the most popular holidays in AQWorlds. Every year, Quibble Coinbiter returns with new pirate-themed gear from the past, present, and future for heroes who don't ask too many questions about where their loot originated. Get all of Quibble's 2022 Talk Like a Pirate Day collection gear starting this weekend, including over 200 items and a rare character page badge for 10,000 ACs! (over 50,000 ACs worth of gear) 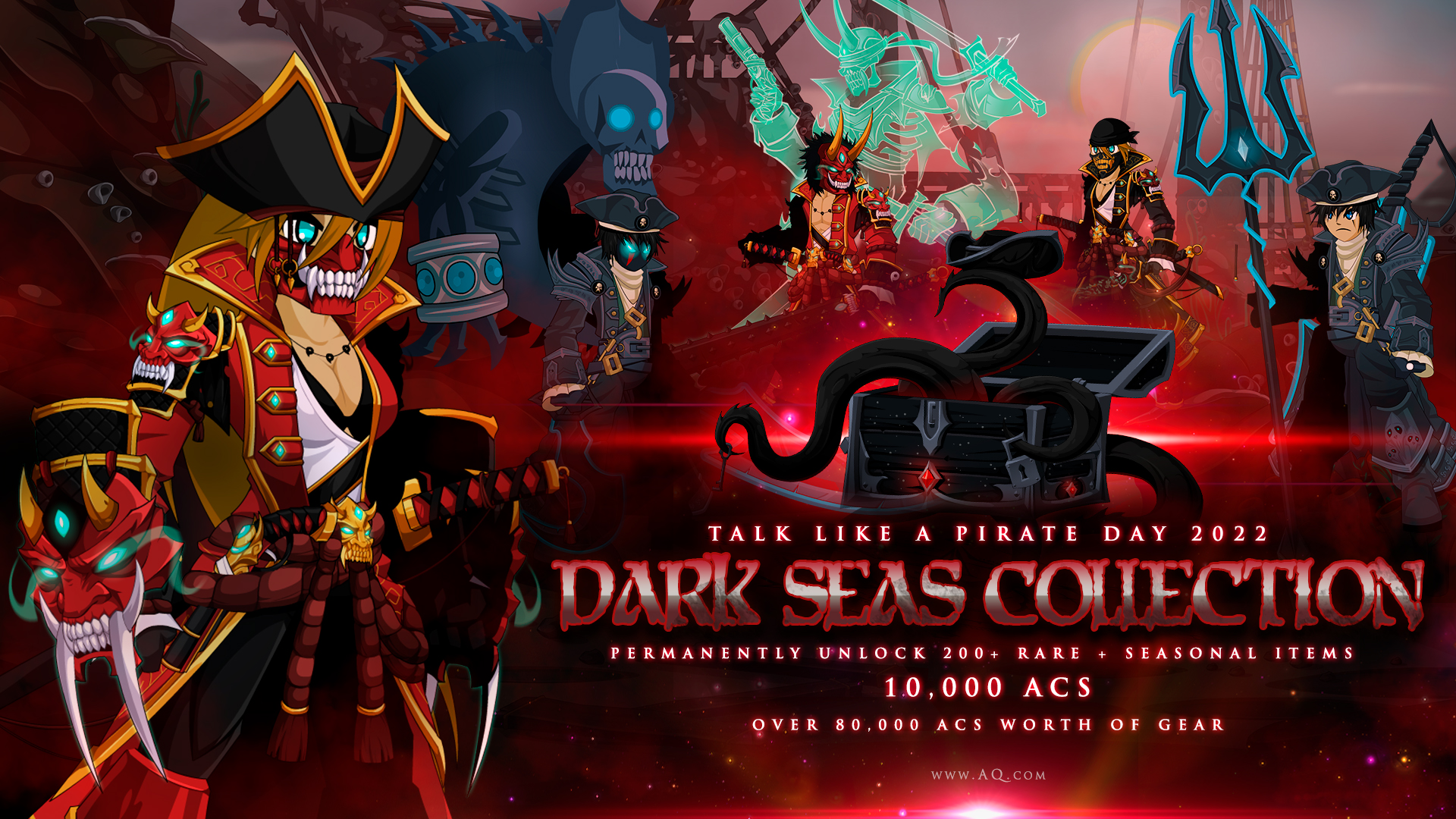 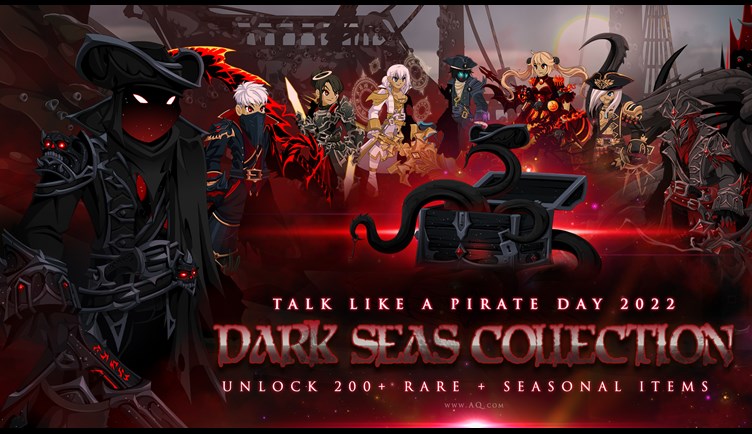 Several other 2021 contest winners' sets will be added as seasonal items in-game, outside of the event collection chest, as well!

Last year, for AQWorlds' 13th anniversary, we a seasonal Chaos Saga Pirate chest with over 100 items! Unlock them all when you get the Chaos Pirate Collection Chest, or buy individual items from the shop in your game menu.

Note: for a few days the Chaos Pirate Collection chest pet was accidentally re-named TLaPD Seasonal Collection Chest. That has been fixed and Captain Rhubarb will refund you if you bought it thinking it was something different.

Just want a couple of the items listed above? Apart from the exclusive pets, all of the gear contained inside the 2022 TLaPD Dark Seas Collection Chest shop will also be available to buy individually in Quibble's Event shop.

Whether you want to tap into your inner darkness or terrify your opponents into submission... we've got new gear for you this weekend! 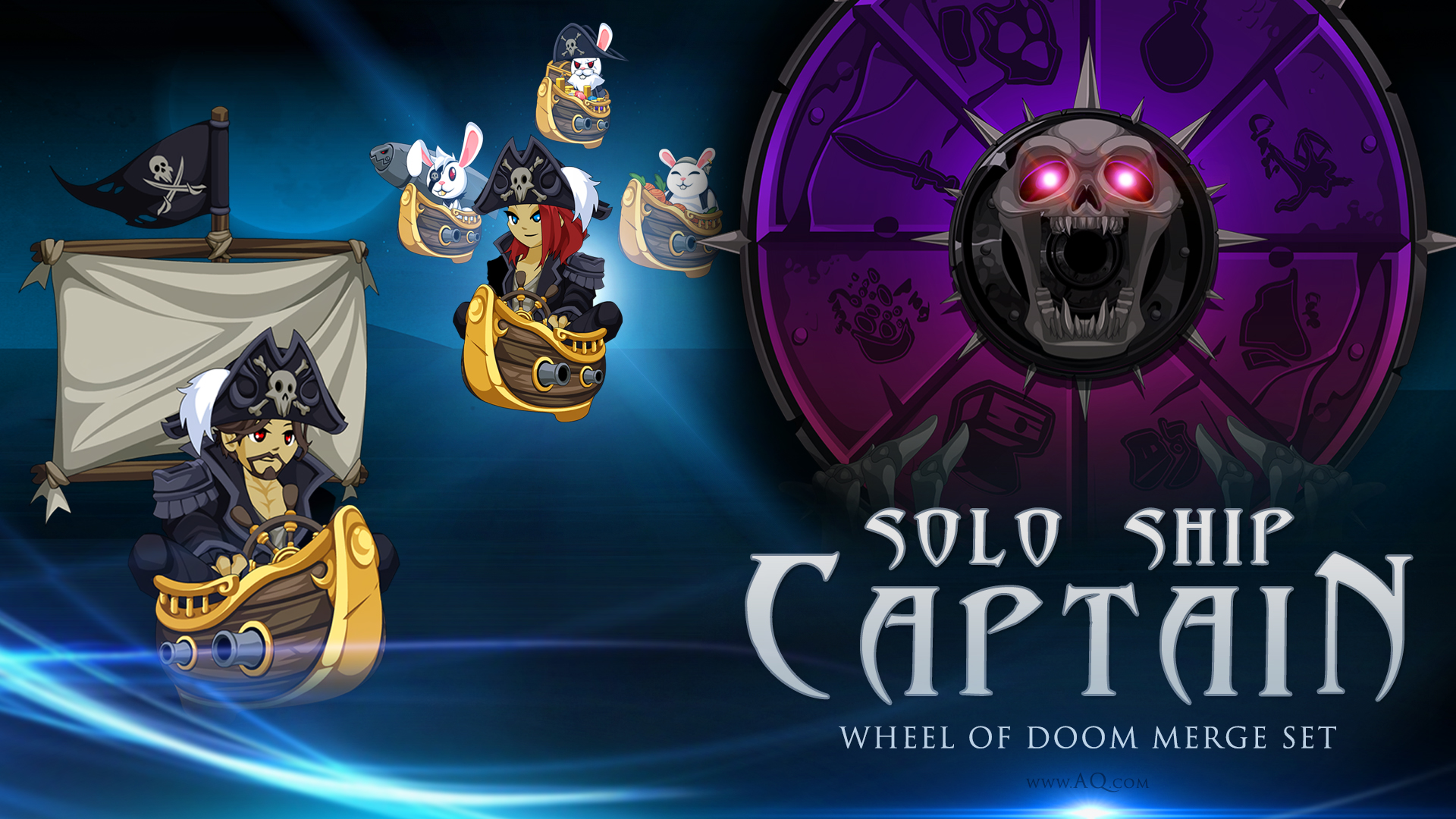 Find all-new gear in the...

Get your Free Wheel of Doom Spins

Everyone loves to get prizes... and that's why everyone in AdventureQuest Worlds will get at least one free spin on the Wheel of Doom per week.

Each time you spin the Wheel of Doom, you'll get a Treasure Potion to spend in the Doom Merge Shop. Save up 1,000 and you'll be able to buy a Wicked Item of Donated Awesomeness. Each WIoDA lets you choose a rare or valuable item* straight from your account manager.

How to Claim your Prize

Make sure you have a confirmed email address attached to your game account, and then follow these steps:

Redeem IoDA tokens to get even MORE bonuses

For each of the first six eligible IoDA tokens you receive , you'll get a FREE Bonus IoDA. The eligible tokens are the Ultimate, Epic, Platinum, Wicked  and Golden tokens. After that, you'll get a free Bonus IoDA for every 3 eligible IoDA you redeem, with no maximum stack. So if you have that dream set of gear you want to create... now you'll be able to.

After you redeem your...

Then, for every 3 IoDA you redeem, you'll unlock another free bonus IoDA.

After you redeem your...

And so on. The 3:1 bonus IoDA ratio starts after you get your first 6 free BIoDA, regardless of when you received them. (Example: if you've redeemed a total of 21 IoDA tokens, you'll unlock 11 BIoDA total. The first 6 BIoDA at a 1:1 ratio, and then 5 more at the 3:1 ratio.)

The Basilisk is easily the most deadly of the four legendary beasts of Greenguard Forest. Its stare is as deadly as its venomous bite. No hunter would dare track this beast... until you proved it could be defeated.

Open a Treasure Chest for a chance to get 1 of...