To refresh the classic Bunnyzookas, we've introduced the shiny new 2019 editions available at Brachylagus in the Biological Preserve Archives, complete with a new active core!

Available at Dage the Evil, these new active primary cores can make a huge different to the outcome of your duels!

The Bunny Bot has a sneaky special attack that has been underused for ages. To improve this, we've expanded the triggers for the Egg Rain attack to include regular sidearm and auxiliary attacks. Core attacks and skills are still exempt.

To encourage experimentation with some classic EpicDuel items, we've unlocked the cores on the Delta Gear. This was done as an experiment to see if it was something worth doing to other rare, locked gear.

To increase the viability of Bounty Hunter Dexterity builds without making them overpowered, we've made the following changes:

An incredible bounty of loot is finally available from HeroMart, including new designs to complement the return of old classics!

This marvelous merch comes with new home items, weapons, achievements in EpicDuel and AQW! What other kinds of EpicDuel merch would you like to see created for HeroMart?

Spring is officially here and Easter is right around to corner, so Bido and Deuce are hard at work crafting some awesome new sets worthy of your extensive collections! 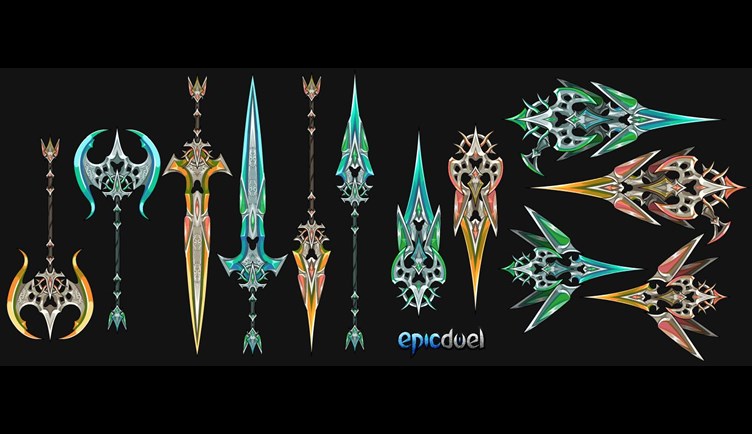 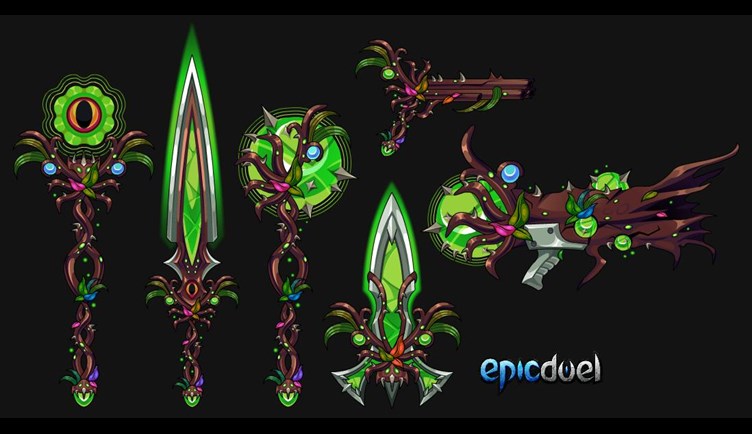 Not among the new cores were a handful of new passives that were designed to give players a big advantage if their health dropped below critical levels. However, there were some problems in the battle engine that kept them from triggering properly at the health threshold, meaning they would be active the entire fight! I fought my own battle against the code for a bit but had to cut them for this update. Hopefully we can get them working as intended and in game in an upcoming update!

One major project I've been planning to implement is the return of Passive skills to the skill trees. I'm very close to having the logistics ironed out for this project but I will need some programming advice to make sure nothing breaks. Changing Passive skills to Active skills was a major change that took a long time to implement so it shouldn't be surprising that reverting the change is taking longer than anticipated. Some of the Passives no longer exist so they must be recreated. Plus, modifying the skill trees is a complicated process that is very unforgiving. It's possible to break every character in the game with small mistake! No pressure, right?

Next week, I will be traveling to visit family so I there are no updates planned for next week. I know that's a bummer, but I haven't taken a real break since...

I don't remember. Anyway, I should return ready to tackle this major project to restore a bit of what you loved about the old battle engine. Hopefully, we don't prove the old saying true, "Be careful what you wish for..."

Now where did I put that Gamma.exe?

Another issue I'd like to address is the speculation of plans for EpicDuel's future. In the near term, I've been able to secure additional help with creating art assets to make meatier releases. The increased attention EpicDuel has received also motivated HeroMart to restock old merch and create new merch. I've noted people expressing fatigue with the weapon releases, but developing new or restoring old features is mostly beyond my capabilities alone. Many of the new features you've enjoyed have been due to snagging snippets of Titan's time for consultation or development. Larger features that require days or weeks are trickier as he has regular obligations to AQ3D. It's frustrating, but Titan's new role comes with less autonomy than he enjoyed as the EpicDuel lead. That's part of the tradeoff when you sign up to work for a company rather than running your own business.

What about EpicDuel 2? ED2D? EDBR? I see people demanding these new projects enter the pipeline constantly, and I agree with you! You don't have to convince *me* that EpicDuel is awesome and deserves an awesome future. I don't need convincing, but I don't have the autonomy to greenlight a project. As I understand it, the plan is to use AQ2D as a basis for converting the Flash games to Unity. Why does AQ2D get preference? AQW is much, MUCH bigger than EpicDuel. Even at EpicDuel's peak, it was orders of magnitude larger by nearly every metric. For those of you clenching your fists like the Arthur meme, note I said bigger, not better. Big is big. If that weren't the case, why on earth would EpicDuel only have one dev? That said, EpicDuel's players are some of the most enthusiastic and devoted fans of all the games, and that doesn't go unnoticed. I love our humble little PvP game, but I understand the rationale, especially when working with limited resources. I can't build the game on my lonesome as I've tragically dumped all my stats into art and charisma (obviously).

What I can do is continue building on EpicDuel, creating new releases, updating balance, and adding features whenever I can. It's in my interest, and AE's interest to see EpicDuel thrive, contrary to claims of sabotage I've seen. I've lashed myself to the mast of this project for over a decade and I really don't know what I'd do beyond it -- a scary thought that's kept me up many nights, but maybe that's a nudge toward better personal development. I'm 100%, full-time EpicDuel and plan to continue for as long as you'll allow it.

That's what I know at this current moment. That knowledge is always subject to change based on news I hear from on high, and I'll certainly update you all when that happens. I won't tease a project before it's 100% official. Thank you for your patience. If you're frustrated, know that it's mutual, but I aim to make the best of the present situation.