The Tyrant's Trial, EpicDuel's first tournament of 2021 has concluded. Congratulations to all the 50 finalists, including the grand prize winner, Daddy!  Maintaining that dueling momentum for 2 weeks isn't easy, but you were able to rise to the challenge! Thank you everyone who participated in this anticipated introduction of EpicDuel's Tournament system. 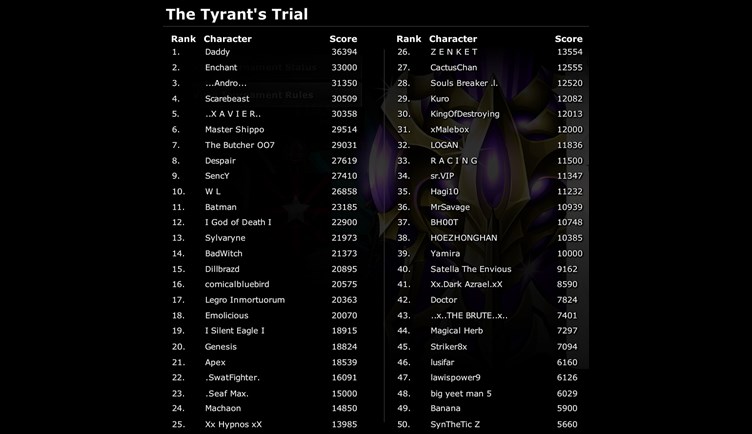 The following prizes were awarded to the top 50 winners! Each tier receives all the awards from the lower tiers:

Throughout this tournament we learned a few lessons and will make some changes for future tournaments. Botting, an issue in all online games, reared its ugly head here. This was expected, and we increased our regular patrols to identify and ban as many botters and dummy accounts as we could. We understand the temptation: logging off means missing out of duels which means fewer points. This is exacerbated by a longer tournament which can create dueling fatigue.

To help reduce the temptation and pressure, subsequent tournaments will be shorter, likely a week or less in length. We may also need to adjust scoring to discourage botting in Juggernaut, if not removing it from the tournament scoring completely. Juggernaut has been in a weird place for awhile in which it's the mode most susceptible to botters, while also being a safe-haven for players who need to grind XP and credits before facing the high rank Legendary players. We don't want to remove an entire battle mode, but adjustments will need to be made to ensure a PvP tournament is actually PvP and not AI vs AI.

Thanks to the flexibility of the Tournament system, we can introduce tournaments exclusively for single battle mode, like an all 2v2 tournament which could bring in new players to the mode who exclusively build for 1v1.