Way to go everyone!

Judged together by the creators of both Yooka-Laylee & AdventureQuest

Amaaaaaaazing! Thank you to everyone who joined in on this crazy video game mash up art contest. The goal was to create original art combining characters from Yooka-Laylee and the AdventureQuest series. The devs from both studios LOVED seeing your creative artwork! With all of the incredible entries it was super hard judging this contest.  Below are the official winners who are receiving the prizes. But know that everyone who drew art for this is a winner in the eyes of all of the devs. 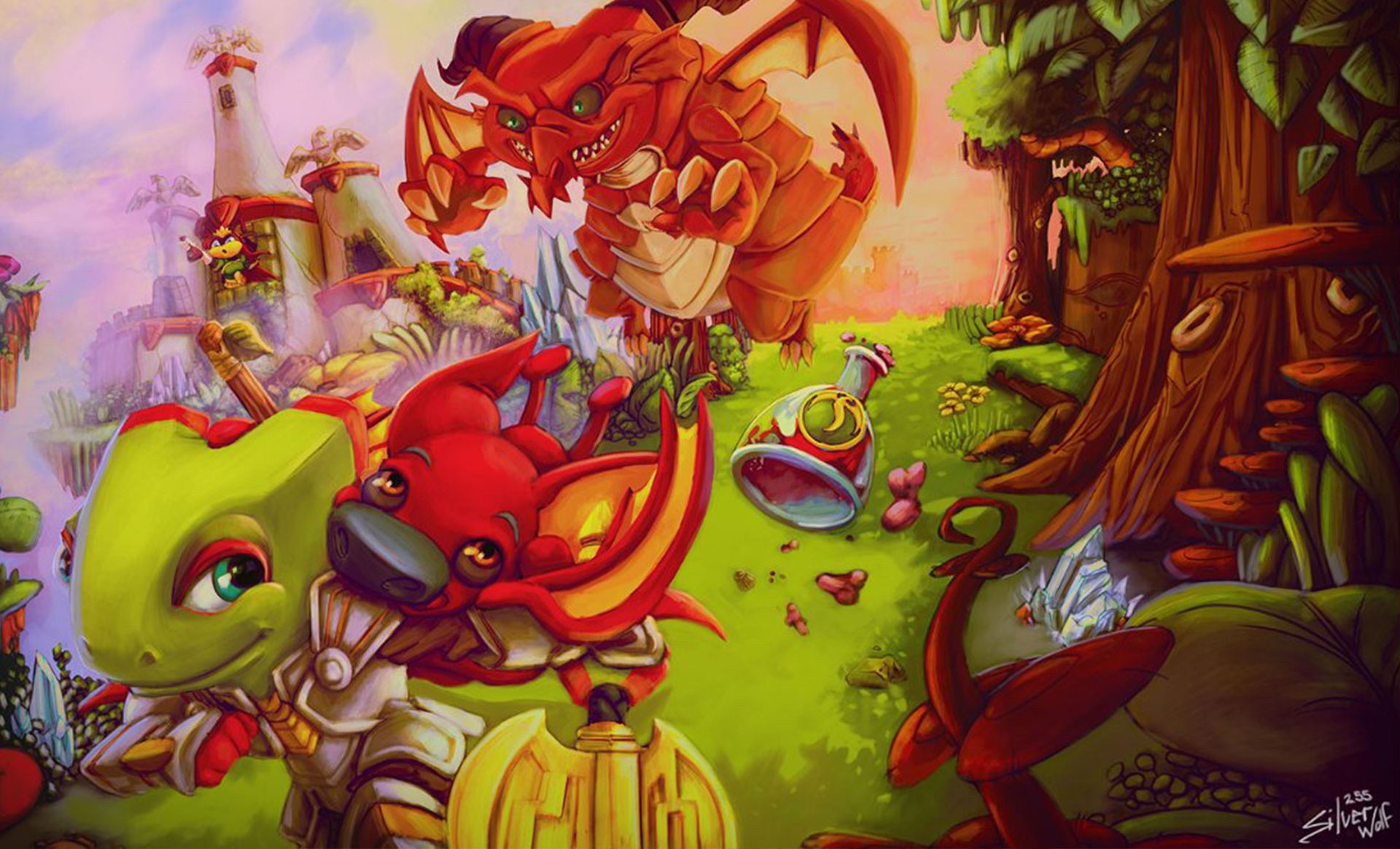 Beautifully painted with so many clever mash up elements! Do you get all of the mash up references in this piece? From Yooka running in Artix's armor with the Blinding Light of Destiny, to Capital B in the form of the Great Fire Dragon, Akriloth... there is a lot of attention to detail earning this piece the Grand Prize Winner for "Best Mashup." 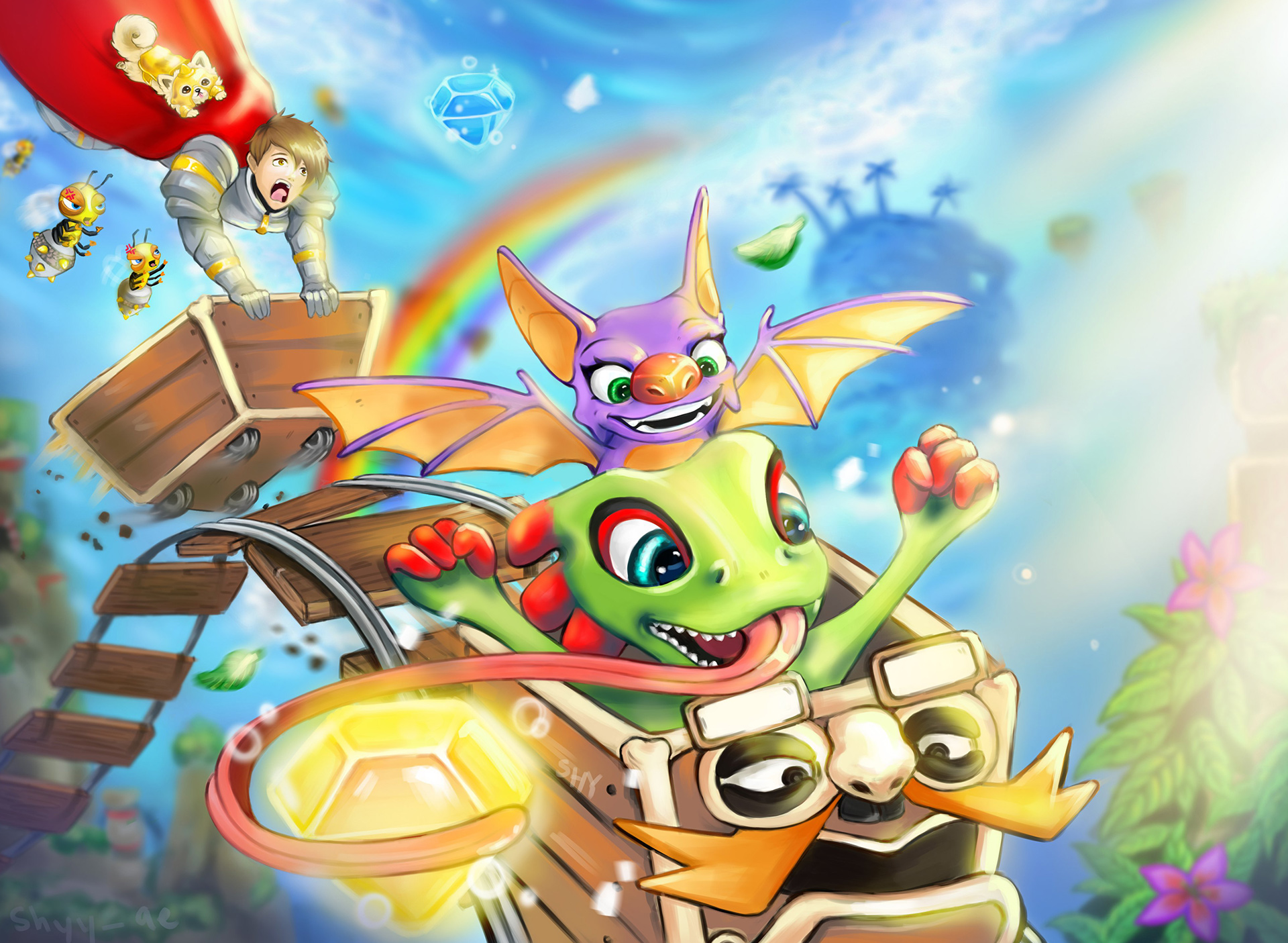 Fun, light hearted, adventure-filled... Shy's group shot perfectly captures the feeling & tone of both the games. "I would play this 10/10"

Grand Prize Winner for "Above and Beyond Mashup"

When we saw that someone painted a Skateboard for this contest... we immediately made the decision to add an additional Grand Prize category for best "Above and Beyond Mashup."  We want to see some pics of this board in action! 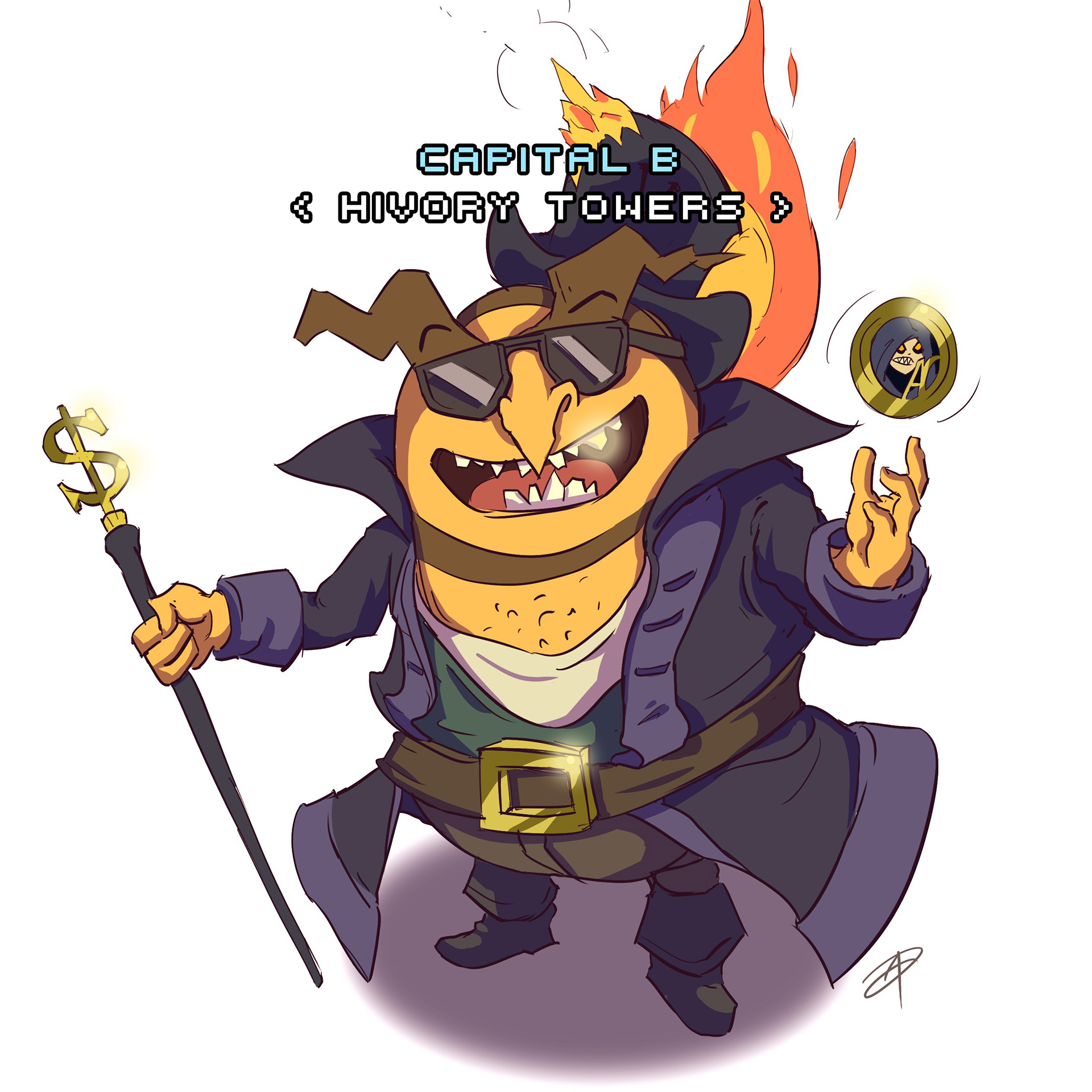 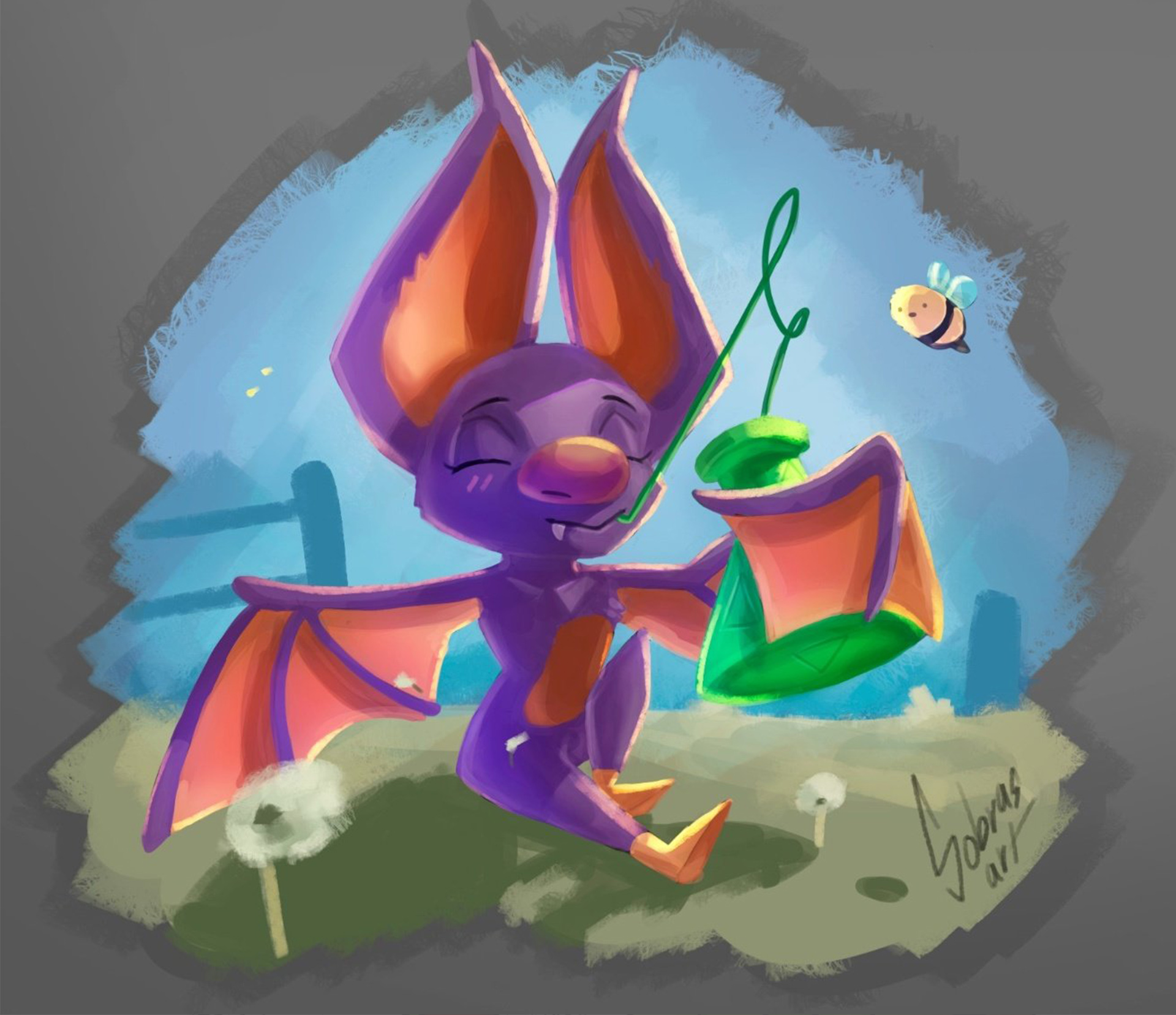 Bee-utiful art work of Laylee sipping a tonic. Sobra's entry was chosen as the best single character from Yooka-Laylee. 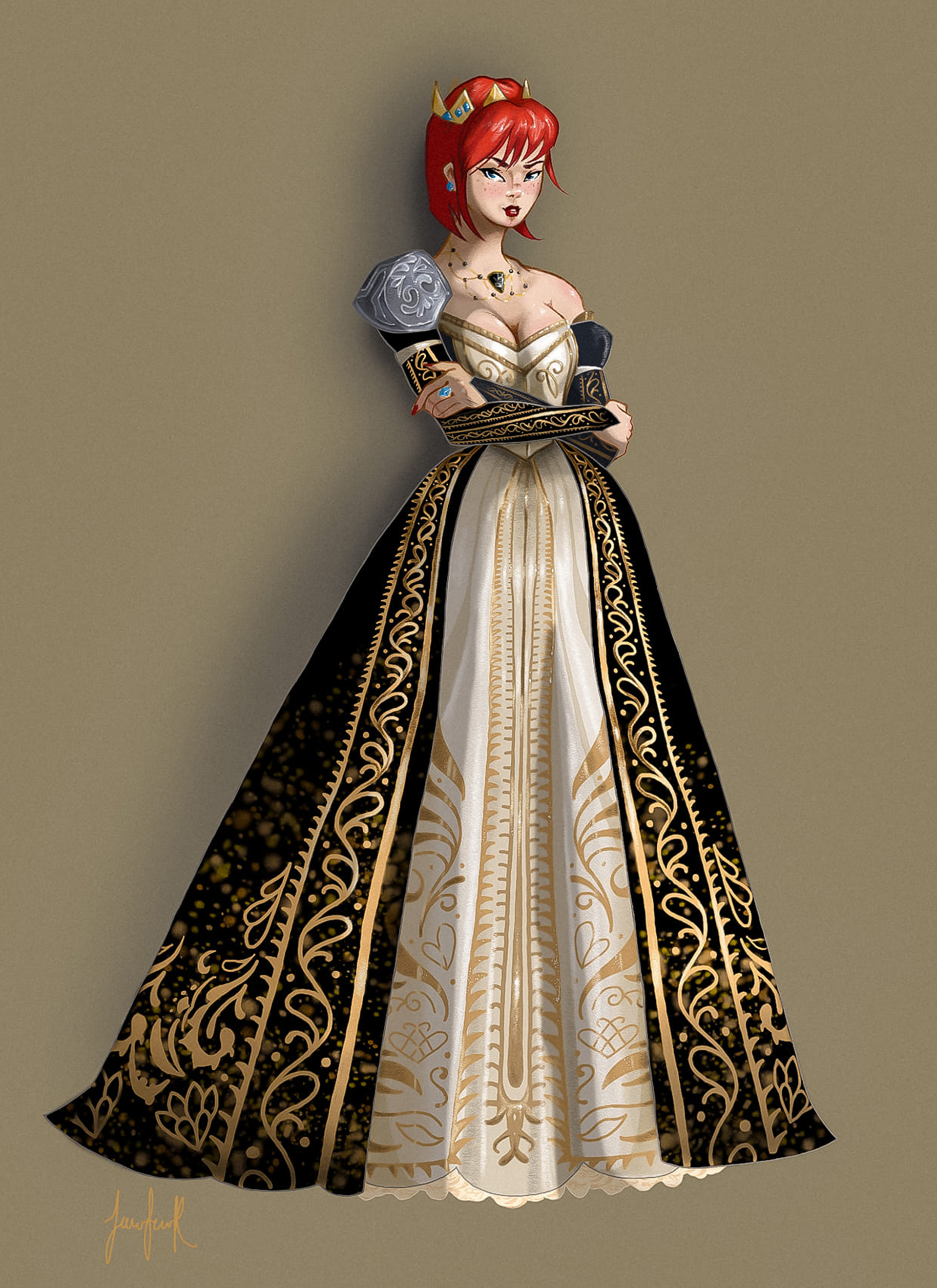 This one was a surprise! Ghambet, the Queen of Games was a band new character just recently added to AdventureQuest 3D. You can find her in the chess map. Frances Jones definitely made a bold move picking a less known character and then going out all on the art for it. We felt that boldness put him over the top earning the best single AdventureQuest character.

Now that was SUPPOSED to be the end of the contest.

The judging was pretty intense. We felt there were other entries which deserved a prize. So we created an additional prize category called...

Entries in the winners circle will receive certificates signed by devs from both studios and a $20 Artix Points Certificate. 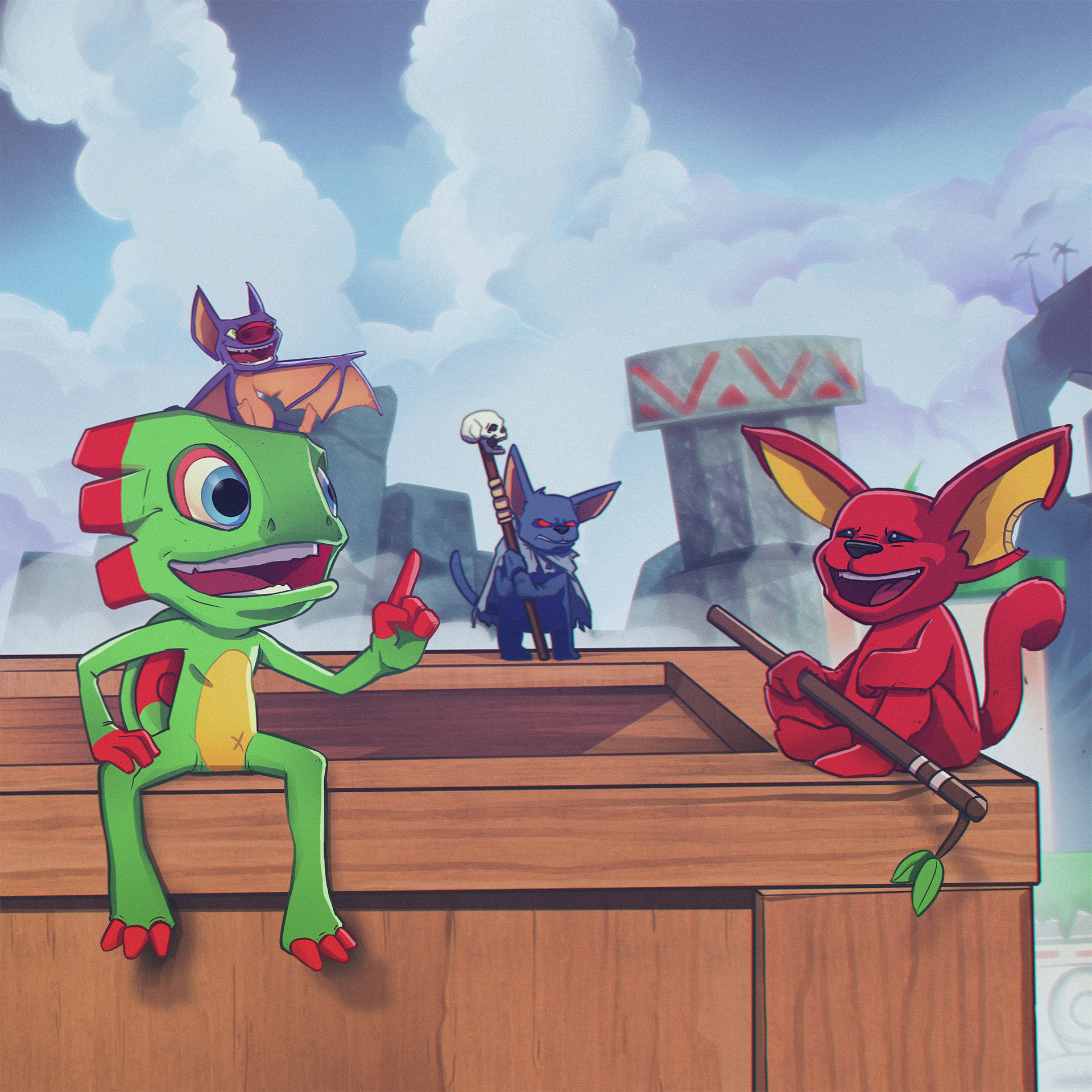 This piece shows Yooka and Laylee talking to the Moglin Twilly as a gumpy Zorbak fumes int he background. Great artwork! 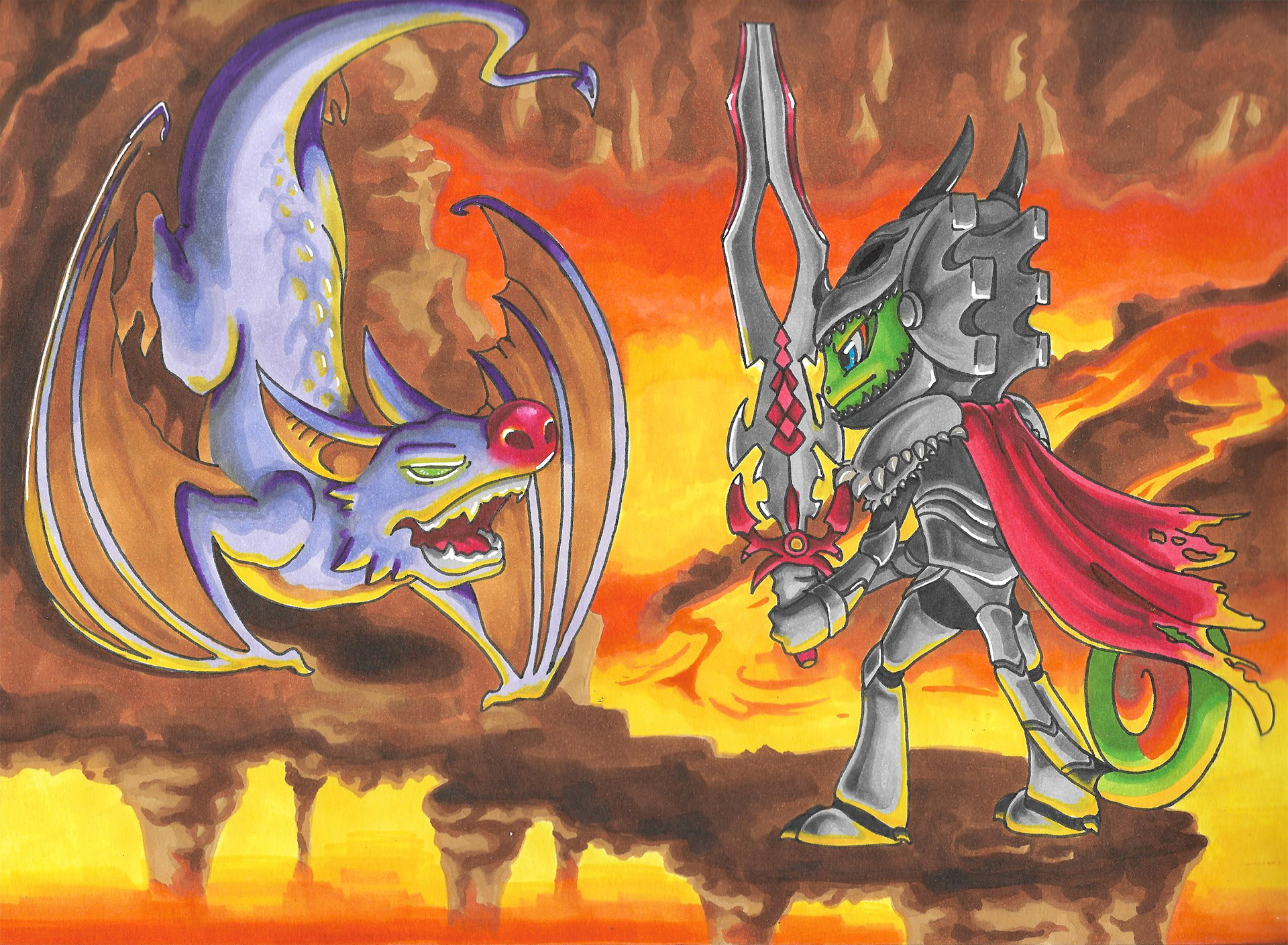 Loved this piece featuring Yooka as the DragonSlayer, Galanoth, and Laylee as a Dragon in Ashfall. 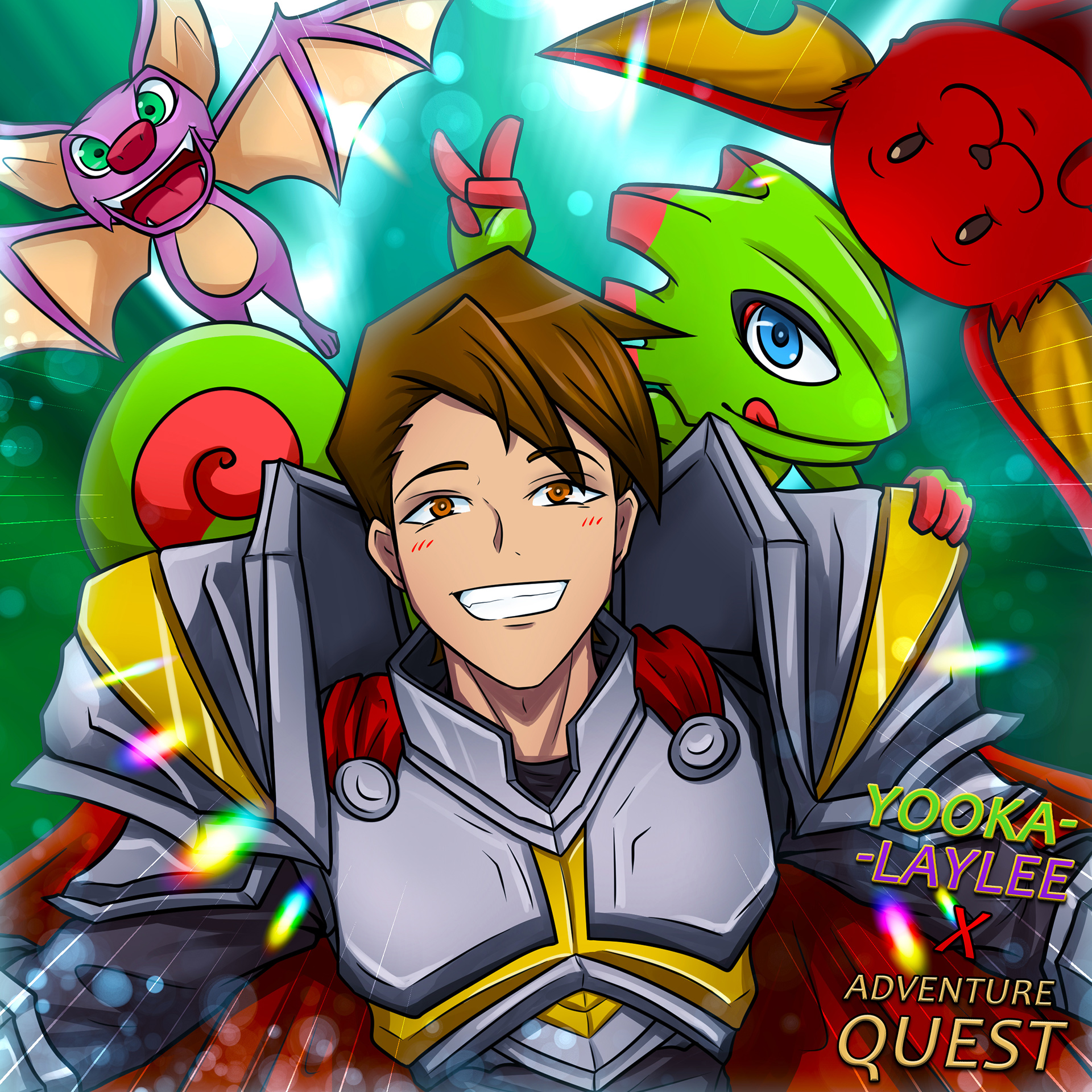 There is so much character and happiness in this piece. It is an absolute treasure. 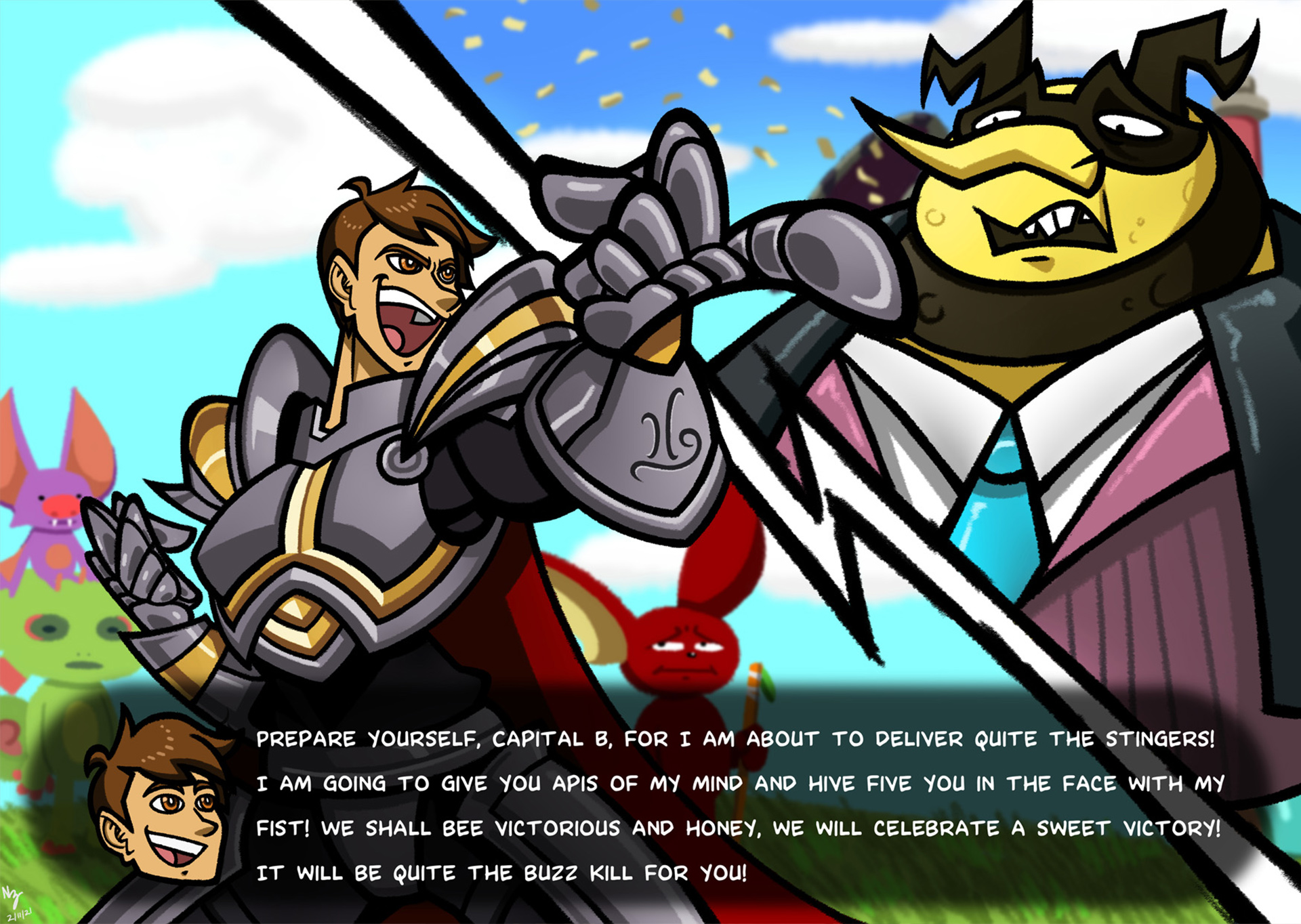 It is clear that GD_DaggerMouth has a future in video game writing. 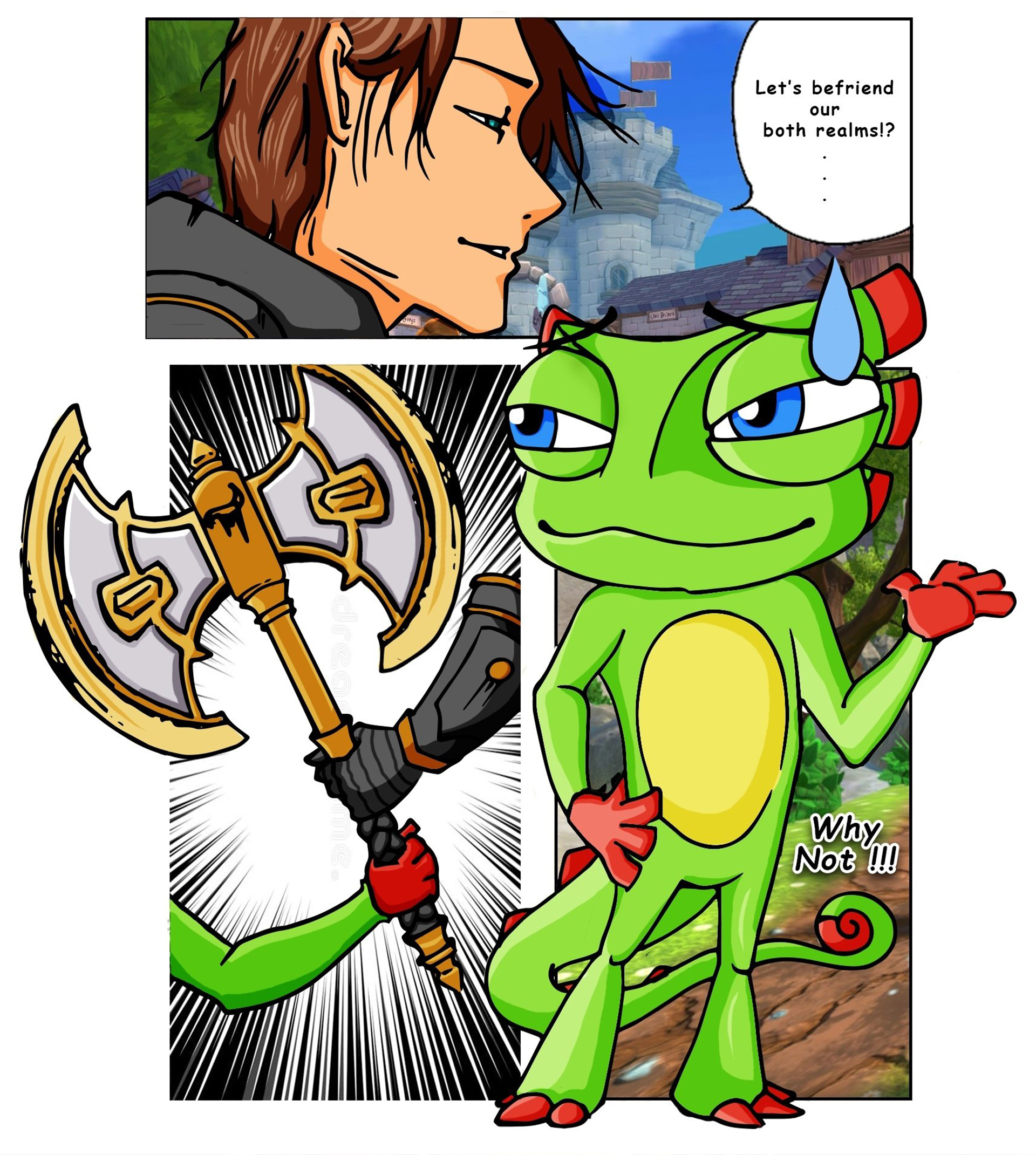 "The Power of Friendship Award" 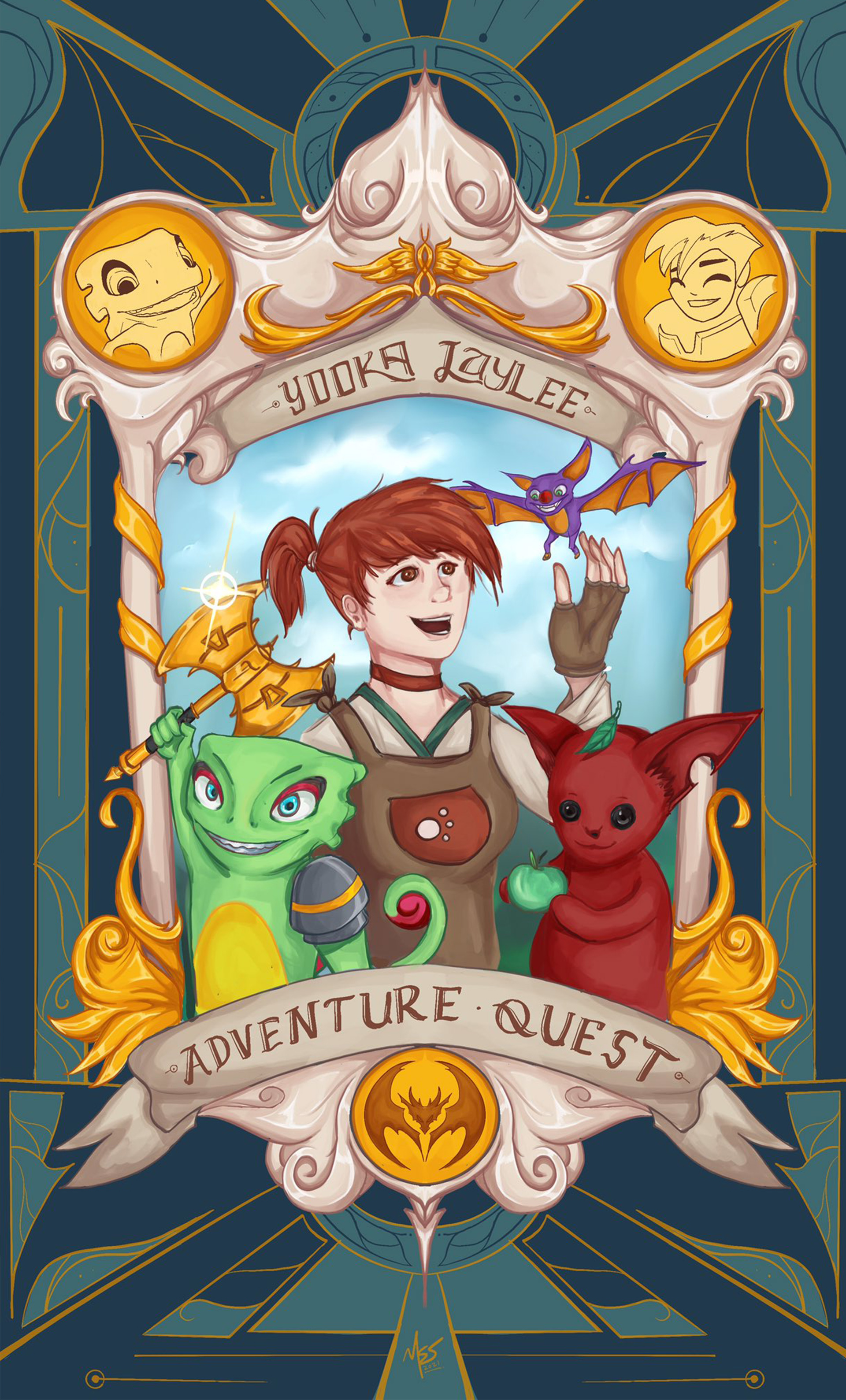 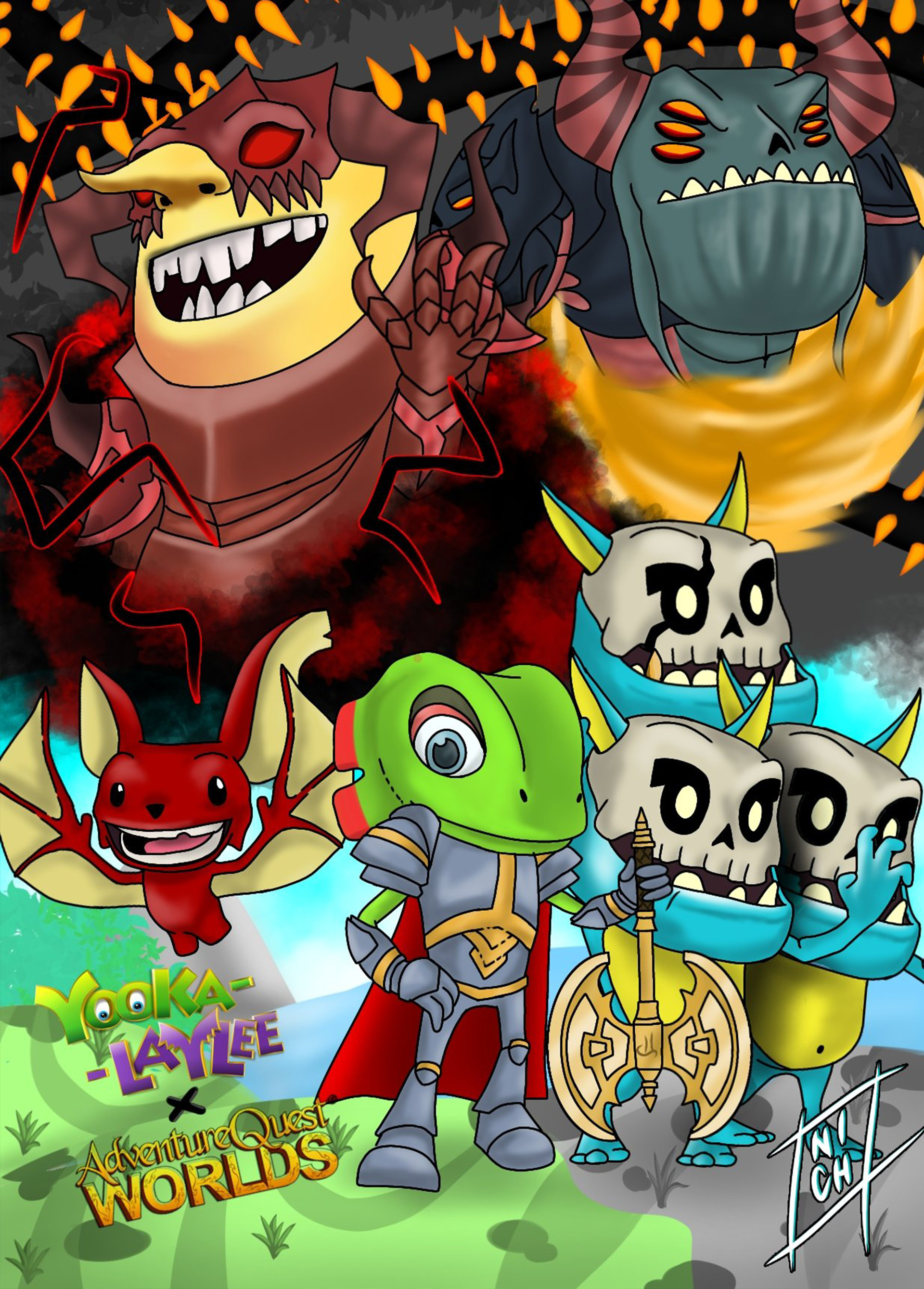 This mashup brilliantly features Capital B in the DoomKnight Sepulchure's armor and an assortment of cleverly combined characters. Kudos! 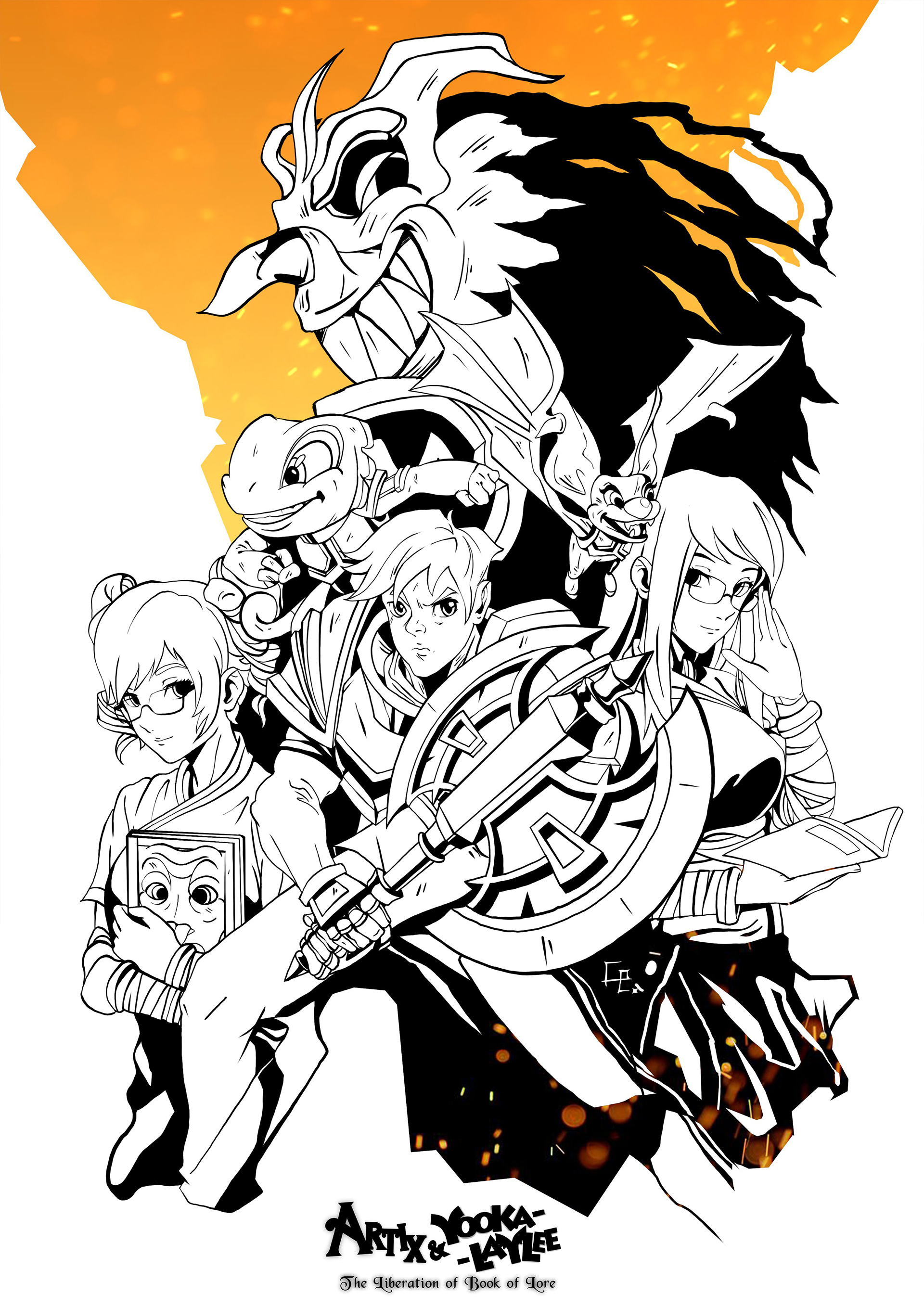 They created a HeroMart ad for it! XD 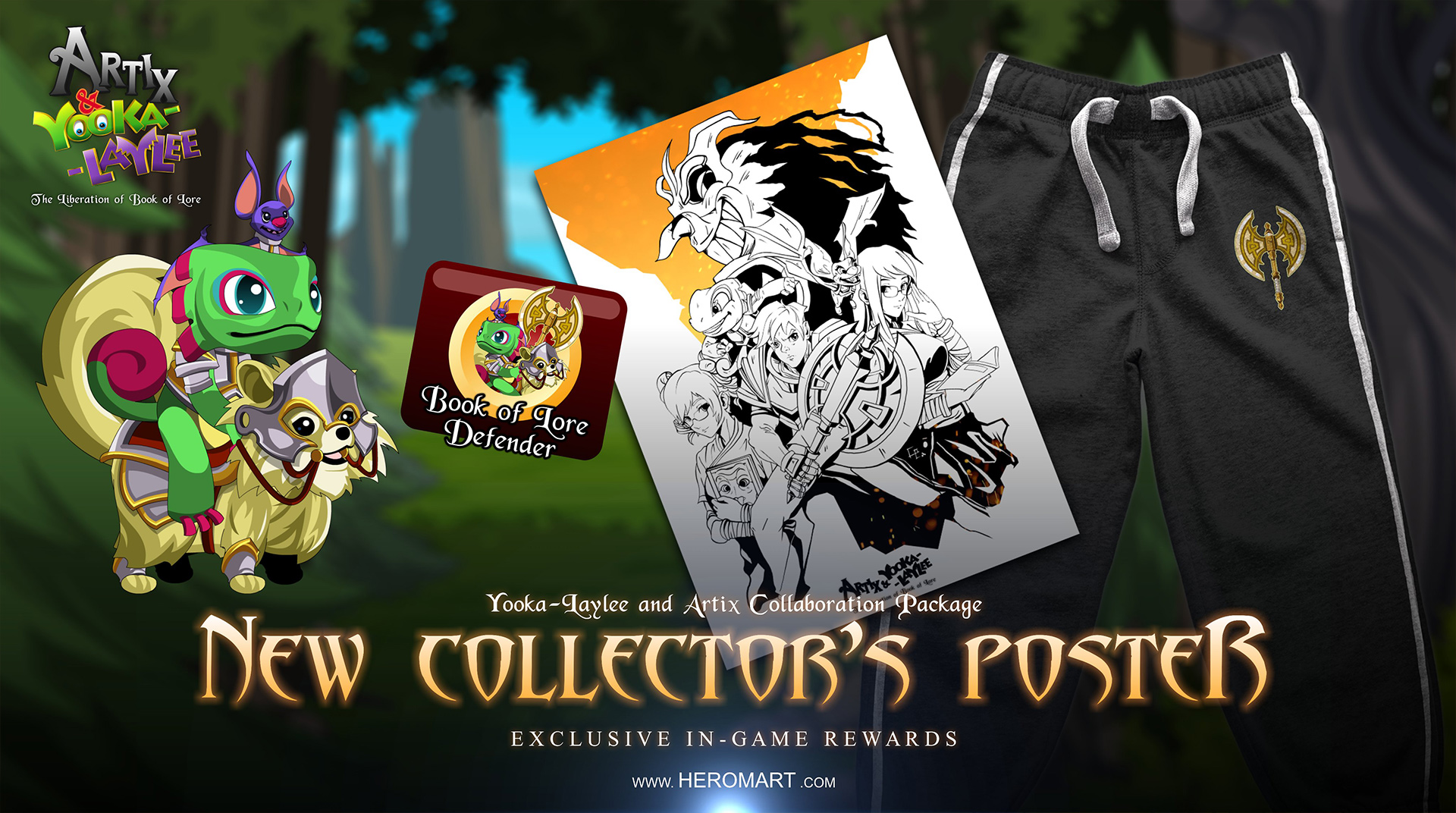 The poster is awesome! But we nearly fell out of our chairs when we saw it came with its own HeroMart.com ad.  The "exclusive in-game pet of Yookartix riding an armored Daimyo" takes the cake. This oozes cleverness. In case you are confused. Artix runs a merch shop called HeroMart which carries apparrel, posters, and toys-- all which include codes to unlock items in the games. 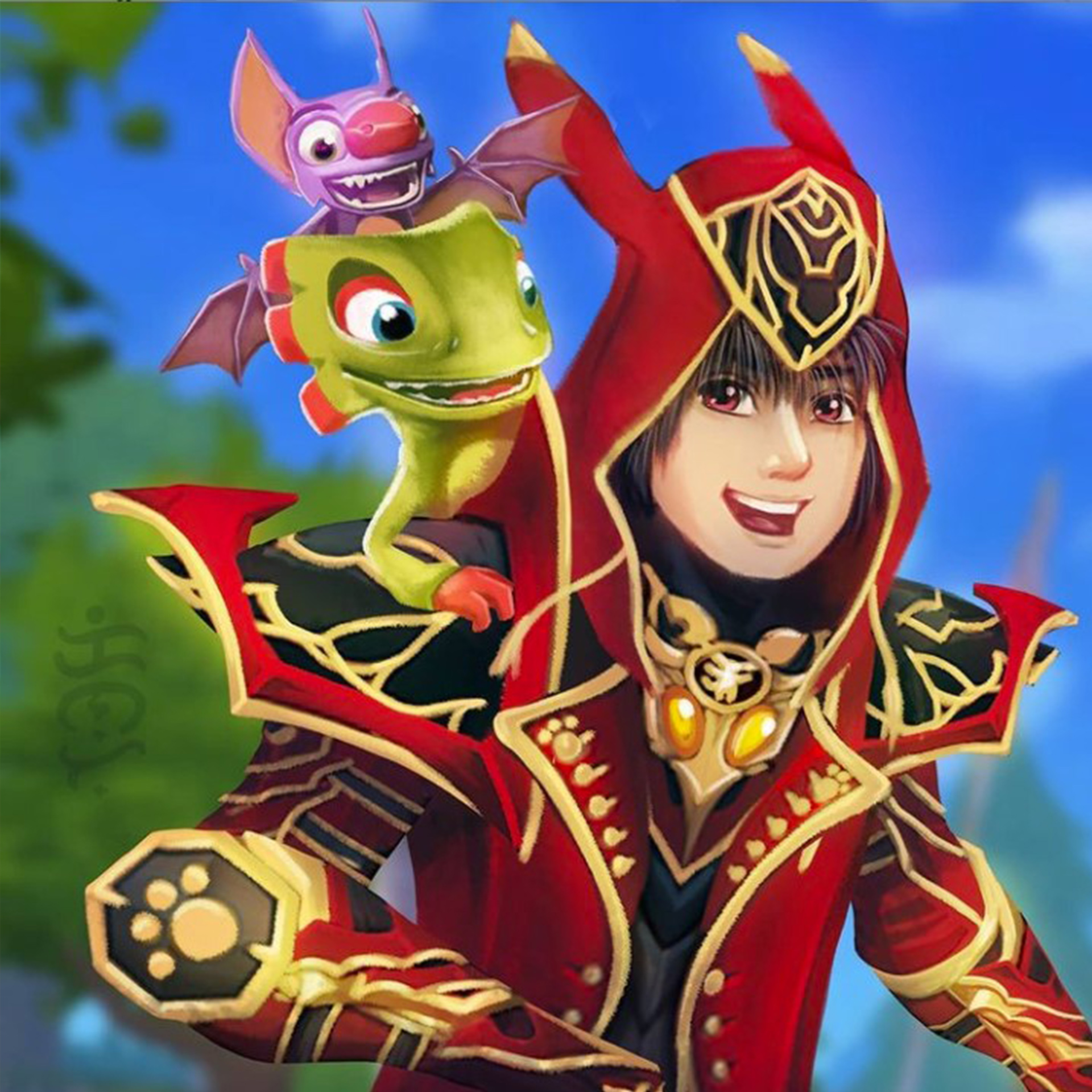 Something clearly went wrong (or super right) when this Moglomancer attempted a summon moglins... Yooka & Laylee showed up instead! great job on this smile-inducing art. 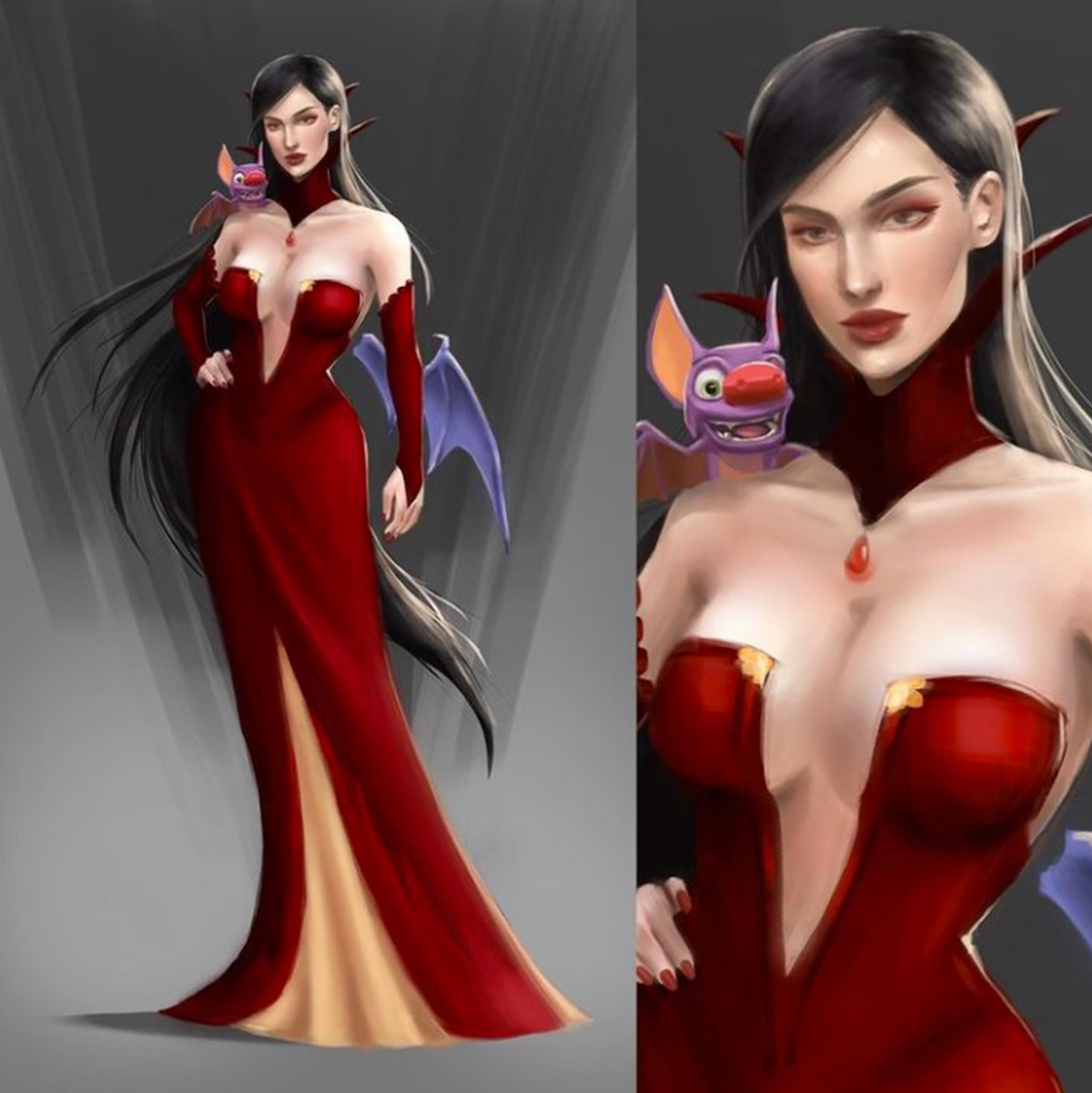 "Bats in your Belfry Award"

What an unexpectedly clever mashup! These two do have a lot in common. Laylee is a purple fruit bat, and Vampire Queen Safiria is a technically a vampire bat. 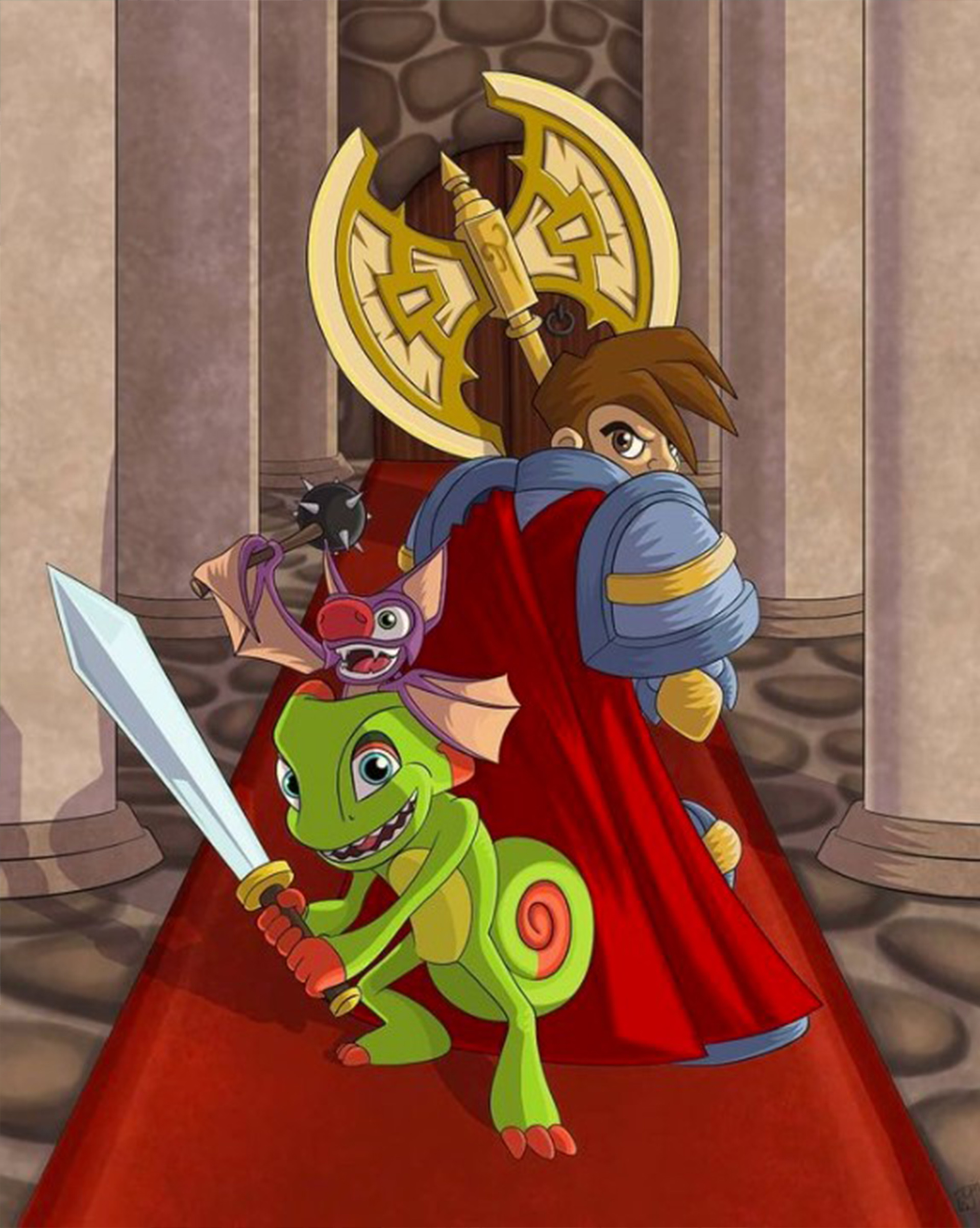 Battle-ready Yooka, Laylee, and Artix are ready for action. The artwork and composition of this are fantastic.

Now this is what we call "Above and Beyond!" What if Yooka & Laylee were the stars of the 13 Lords of Chaos Saga?

Once again, congratulations and thank you to everyone who joined in this unepxcted and fun mash-up art contest. Everyone who participated should be proud. If you enjoy this sort of thing, let us know!

We are in the process of reaching out to winners to award prizes. If you have any questions, please send a tweet to @AE_Contests

ABOUT THE GAMES IN THIS MASH-UP 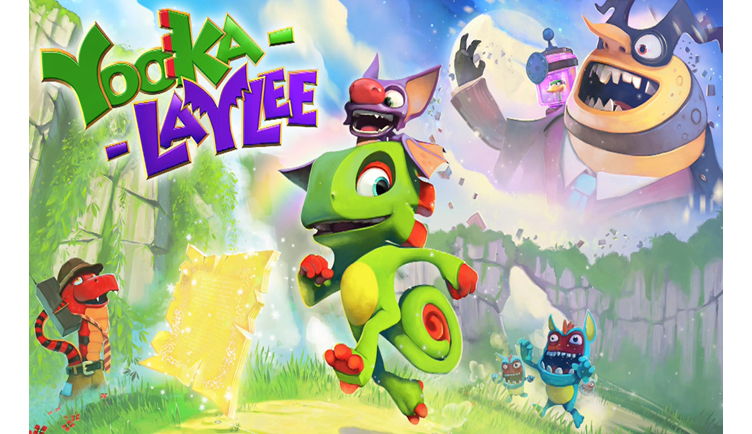 Explore huge, beautiful worlds, meet (and beat) an unforgettable cast of characters and horde a vault-load of shiny collectibles as the colourful buddy-duo Yooka (the green one) and Laylee (the wisecracking bat with the big nose) embark on an epic adventures to thwart corporate creep Capital B and his devious scheme to absorb all the world’s books… and convert them into pure profit!

Using their arsenal of special moves, our heroes will tackle a huge variety of puzzles and platforming challenges in their search for Pagies, the golden bounty used to unlock — and expand — stunning new worlds, each jammed to the gills with oddball characters, hulking bosses, minecart challenges, arcade games, quiz shows, multiplayer games… and much more 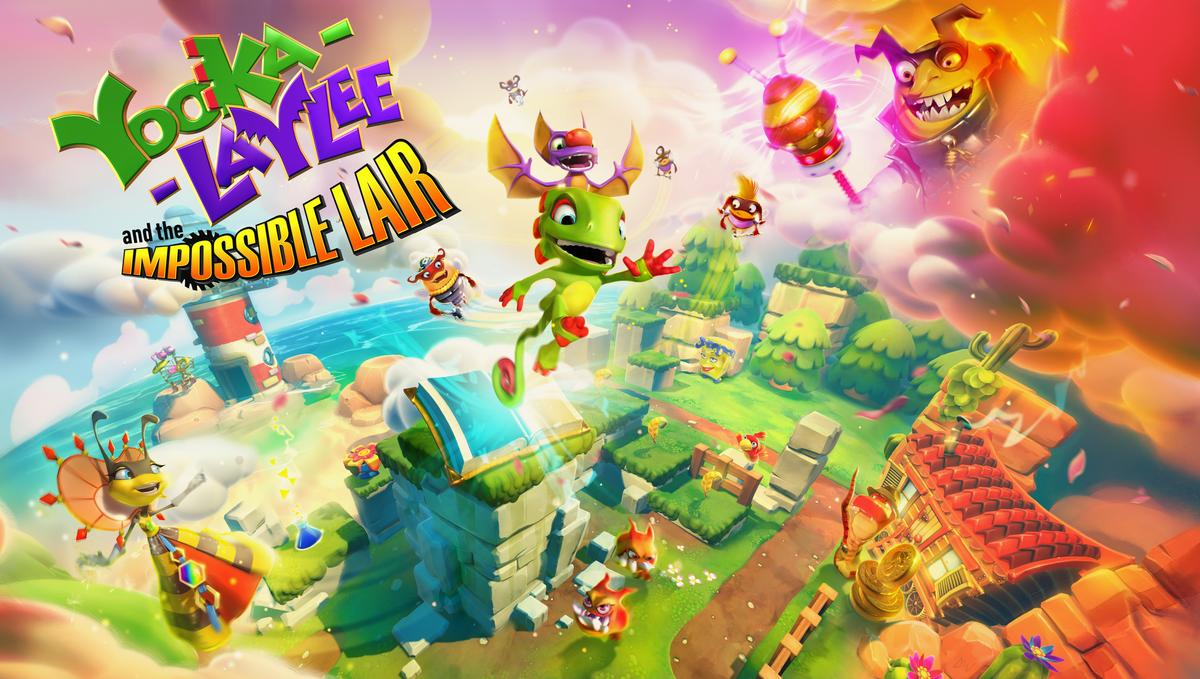 About Yooka-Laylee and the Impossible Lair

Yooka-Laylee and the Impossible Lair is a brand-new 2.5D platformer from some of the key creative talent behind 'Donkey Kong Country'. With their arch-nemesis Capital B up to no good, the buddy duo needs to spring into action once again to save the day. To thwart his evil plan of using a “Hivemind” device to enslave an entire kingdom of bees, our heroes need to take the fight to Capital B’s “Impossible” Lair. Things look tough, but with the help of Queen Phoebee and her Royal Beetallion, Yooka and Laylee might just have a chance!

Play Yooka-Laylee and the Impossible Lair: 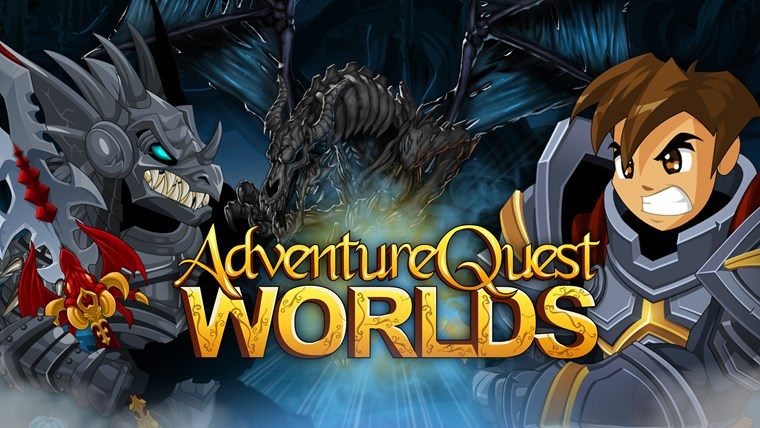 AdventureQuest Worlds is a fantasy MMORPG (massively multiplayer online role-playing game) that is updated every week with brand new adventures, quests, cutscenes, holiday and special events, and loot! Create your free hero and be completely surprised when you never slam your head into a paywall. Our friendly team listens carefully to player feedback... and uses it to shape the direction of the game and storylines. Our beautiful and ever-growing world is filled with monsters, quests, cinematic cutscenes, and magical places to explore. Like other AdventureQuest games, you can collect classes and switch between them at any time. 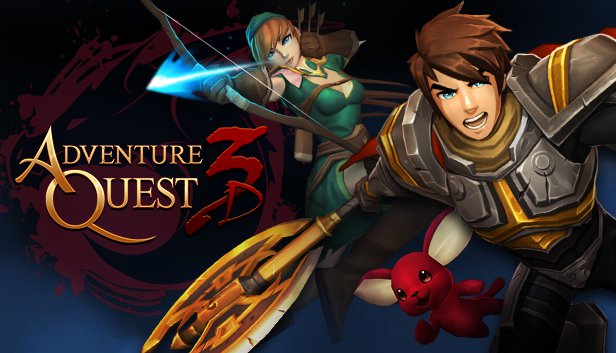 AdventureQuest 3D is an inspired re-imagining of the original web browser games... in, uh 3D! Your phones, tablets, and computers are all a portal to our multiplayer online world. It is a "true cross-platform game". Which means all players log in to the same world and play together, no matter where they are logging in from.

Set in the most dangerous era of AdventureQuest's timeline, the world has come under attack by a mysterious Void King.. Answer the call and travel to the legendary town of Battleon where you will discover unusual characters, incredible adventures, horrifying puns, and a world story line so big that you will have to help us write it as we go... did we mention regular updates?

Search for "AdventureQuest 3D" on Steam, Android, or Apple iOS