I hope you're hungry, because this weekend's release is EXTRA-meaty! We've got three seasonal holiday release updates heading your way, so gear up and get ready to battle on!

This weekend, battle through new and returning seasonal events in: 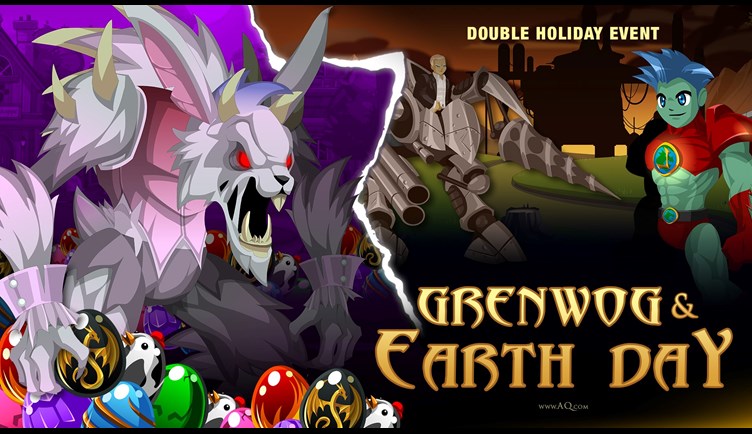 Meateor Hunt: our April Fowls event continues as Cysero, Lim, and Warlic ask for your help to hunt down fragments of the Meateor for... reasons. GOOD reasons. Really. O_O

Grenwog returns: our seasonal spring event boss + rewards are back! This year, the Grenwog's gotten into the spirit of our fowl joke and mutated into the ultimate abomination: the Chickrenwog

Earth Day is back: Talk to Captain Lore in /pollution to complete the story evevent, then find new reward drops from Ozone + General Pollution

TRIPLE Void Aura Boost: we're starting tomorrow's Void Aura Boost a litttttle early! Log in now for a TRIPLE Drop boost on Void Aura quest rewards! (Get 6, 15, or 30 Void Auras instead of 2, 5, or 10)

Earlier this month, a giant meateor from the Plane of Breakfast crashed into Battleontown. But from the looks (and smell!) of it, there was more to it just a giant egg: a few bits broke away while it was entered the atmosphere. This weekend, /join meateorhunt and talk to Cysero the Mad Weaponsmith, Lim the Sanest Scientist, and Warlic the ArchMage need your help to hunt them all down. For... reasons O_O. 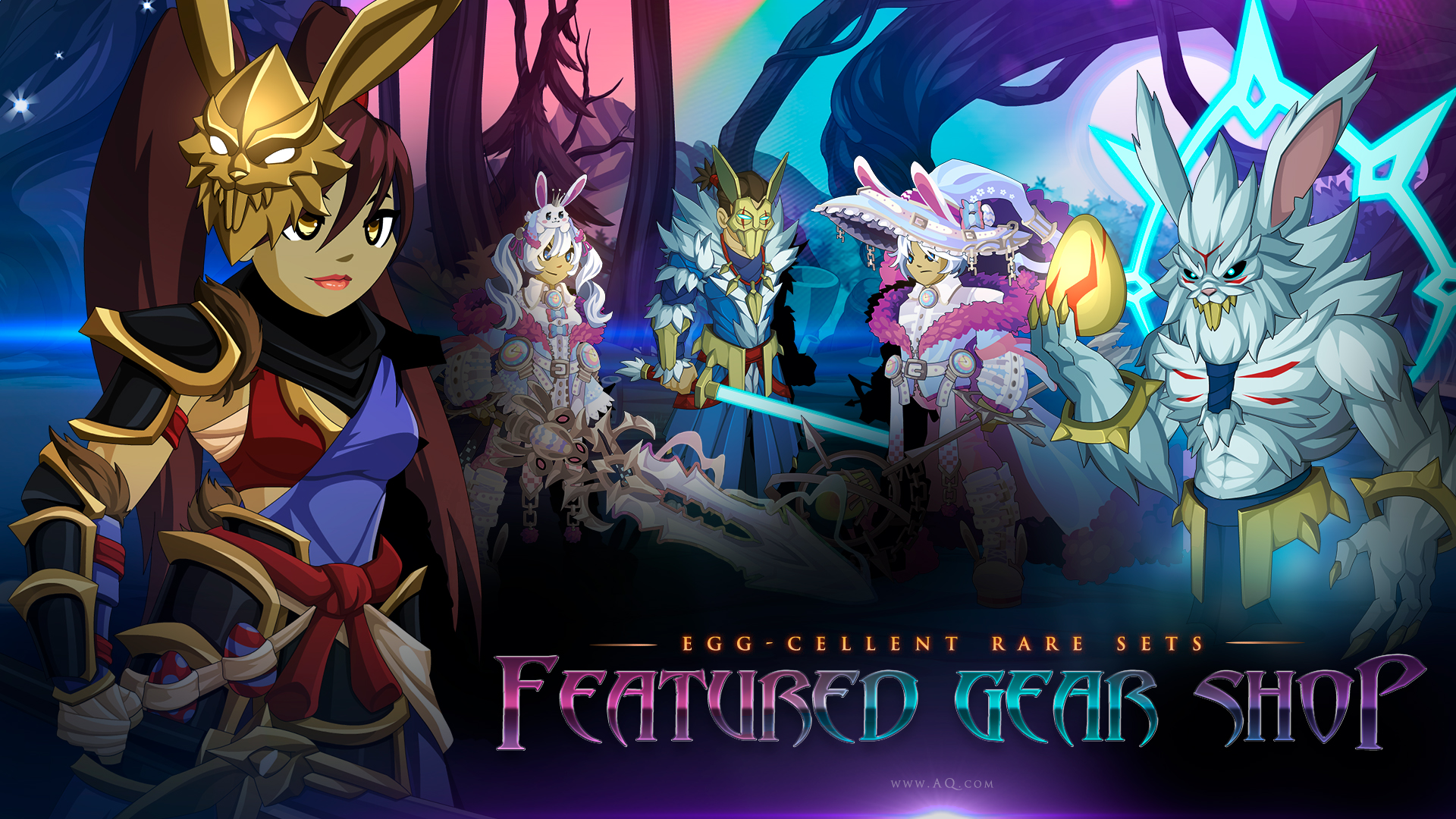 We've got a basketful of new Grenwog gear to get you hoppin'! Check out the color-customizable Sweet Spring Mage, Rabid Ronin, and Grenwog Guardian Warrior sets in your Featured Gear shop in the game menu until April 29th. 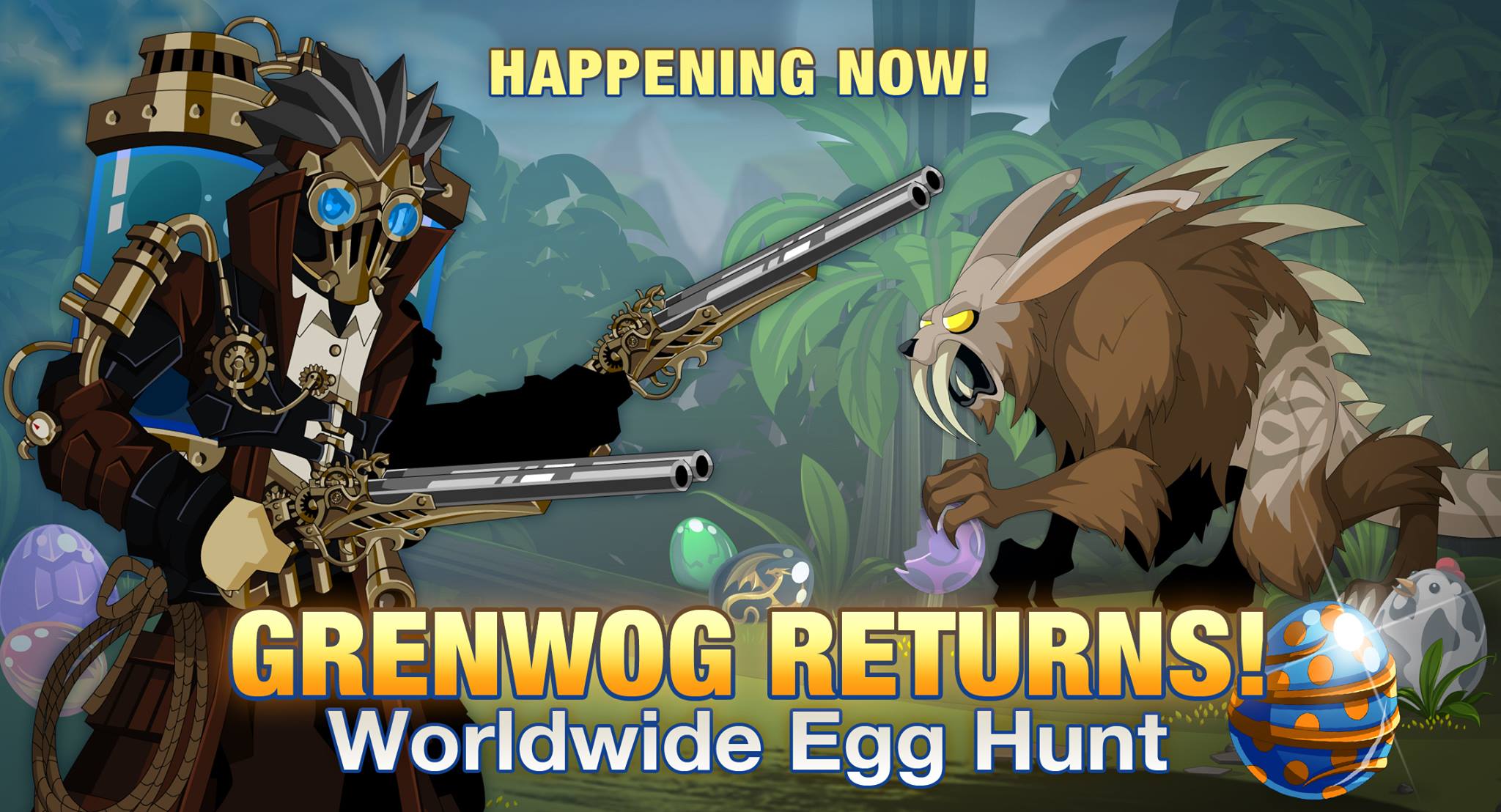 Every year, heroes hunt around Battleon for eggs and prizes, and battle the deadly, egg-sucking Grenwog as we celebrate the return of Spring! This weekend talk to Cabdury (the friendliest, most inedible bunny in town) to begin this year's Egg Hunt quests in Battleon.

Collect the eggs hidden around BattleOn and the rest of the town to unlock the Backpack of Eggs and the Vorpal Bunny pet! (Note: Any Vorpal Bunny will be able to access the quests to get this year's regular Berserker Bunny items. Enjoy!)

After whetting your detection skills in BattleOn, TRUE eggsplorers can talk to Cabdury and decipher his clues to find the pink, green, blue, purple, or multicolored eggs hidden around the rest of Lore to unlock all-new rewards: the Steampunk Eggsplorer set!

Once you've collected all those, why not try Cabdury's Treat Hunt to unlock the Evolved Berserker Bunny set? The merge items will drop from the bosses in Greenguard Forest.  With an Armor, a Helm, a Spear, and a Long-sword, you'll have a bun-tiful amount of items to choose from! The Evolved Berserker Bunny Armor also requires the drop from the final Vorpal Bunny quest.

The legendary Grenwog is one of the fiercest beasts on Lore. Each spring, it awakens with one thing on its mind -- FOOD. And its favorite snack is, of course, eggs! (And the heroes who try to steal them. So beware!) Last year's Jurassic Grenwog adventure will return, along with the seasonal boss battle in the /grenwog map!

Grenwog gear, collect it all! (Or as much as you can carry):

Be a hero, join the clean-up crew to save the world from the evils of pollution! Captain Lore is back and he needs your help again! /Join pollution to help Captain Lore battle General Pollution, the foulest villain around, free his eco-friendly energy platform from the chaotic clutches of General Pollution! Reduce, reuse, and recycle as many elementals as you can to unlock Captain Lore's shop and gain access to the greenest gear in the game!

General Pollution’s evil knows no bounds. He has moved beyond polluting our world and is now using a new ally to pour his filthy lies into the minds of the good people of Lore. His scientists have created Commodore Core… a super-villain leading the push for deep-lore drilling straight into the heart of Lore’s core under the guise of finding newer, cleaner sources of energy.

Need help battling through the Earth Day seasonal event? Check out the event guide in the Lorepedia