This Friday, log in and battle before the concert begins

Ten years ago (way way back in 2009), AQWorlds had its first-ever live in-game concert with special musical guest, Aurelio Voltaire. Fast forward to 2019 and we're preparing to celebrate that anniversary AND the grand-opening of the Battleon Arena in AdventureQuest 3D with another special musical guest and an INSANE, massively-monstrous mosh pit event. The event begins later this month, but for several weeks, both the AQ3D and AQWorlds teams have been in overdrive preparing for the big day. And now, we need YOUR help! This weekend, log in and /join arenaline to gear up and help Bryce Platinum (the concert promoter) get ready.

Talk to Bryce Platinum, the concert promoter, to begin quests for all new concert outfits and weapons! Save up the Arena Coins he'll give you, too -- you'll use them (along with other event merge items) in Johnny Trax' merge shop to create the Heavy Metal Necro class!

Yes, a new class! Pisces and the class crew have been hard at work on the new Heavy Metal Necro class. Some early information before the full class details post goes up next week...

Talk to Johnny Trax, the concert merch vendor, for a chance to gear up before the show begins later this month. Select items from her event shop are available this weekend. But save up the Arena Coins you earn from Bryce's quests because once the event opens, she'll have even MORE gear! 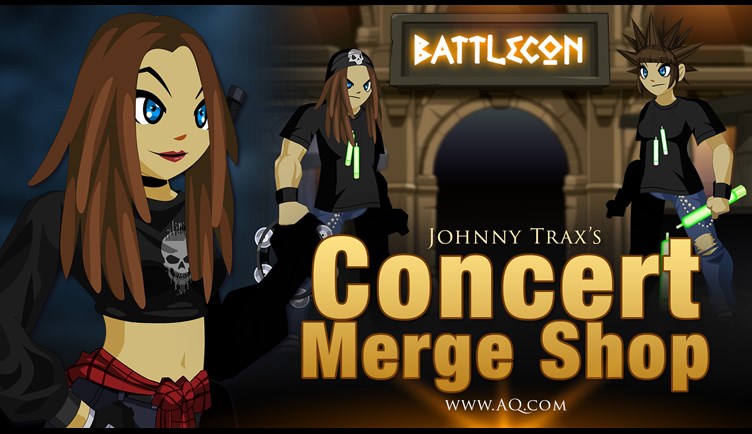